Sudden Oak Death – the ‘foot and mouth’ of trees 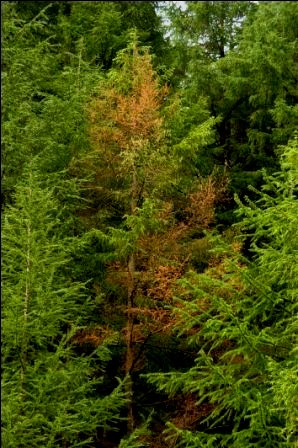 Hundreds of thousands of trees are being felled in the UK to try and prevent spread of Sudden Oak Death. The disease, caused by the fungus Phytophthora ramorum, came to the UK in 2003 via imported plants from America where it mainly infects oaks. European species of oak have a high resistance to the disease but it has jumped to other species such as larch and is spreading quickly.

The distribution of the disease extends to a number of European countries, where it mostly infects plants and shrubs rather than trees. Few trees in the UK were affected until 2009, when P. ramorum was found infecting and killing large numbers of Japanese larch trees in southwest England. Then in 2010 it was found on Japanese larches in Wales, Northern Ireland and the Republic of Ireland. This sudden change in the pathogen’s behaviour was the first time in the world that P. ramorum had infected and reproduced on large numbers of a commercially important conifer tree species. It was also an unexpected setback to efforts to control the disease as the disease can spread across larch trees five times faster than any other trees.

Rhododendron ponticum is a key carrier of the disease and extra efforts are being made to remove rhododendrons from woodlands. But anyone who’s tried to remove rhododendrons before will know that this is no easy task! R. ponticum is an invasive species in the UK, spreading in woodland areas and replacing the native understory. It’s particularly difficult to eradicate because the roots can make new shoots. CABI has recently embarked on a project with Forest Research to find a suitable biological control organism to prevent regrowth of rhododendron stumps. Keep an eye on our website to see the results.

Once trees are infected with the disease, the best method of control is to fell the infected trees immediately.
"Felling is the only way to control the disease but our scientists are working on other ways of treating it in the future," said Alison Field, regional director for the Forestry Commission in the south west in an interview with the BBC.

Felling of infected larch trees is taking place across the country in an effort to control spread. The latest was the news today that 60,000 larch trees would be felled on the Quantock Hills (Somerset), a designated Area of Outstanding Natural Beauty. Aside from the gaping hole in the landscape, and the repercussions for wildlife, this also puts huge pressure on sawmills to process the felled trees for use. Much of the infected larch is being chipped for use as fuel for power stations.

Philip Chambers, owner of Milverton Sawmill, said: "Basically this is foot and mouth for larch. There could be a complete cull of all the larch in the south west."

Along with the recently announced UK government plans to sell off 150,000 hectares of national forest and woodland in England, times are uncertain for UK forestry. The government insists that it “will not compromise the protection of our most valuable and biodiverse forests. Full measures will remain in place to preserve the public benefits of woods and forests under any new ownership arrangements.”  My advice? Make the most of the forests and woodlands around you now, whilst you have the chance.