Can London 2012 be a winner for tourism? 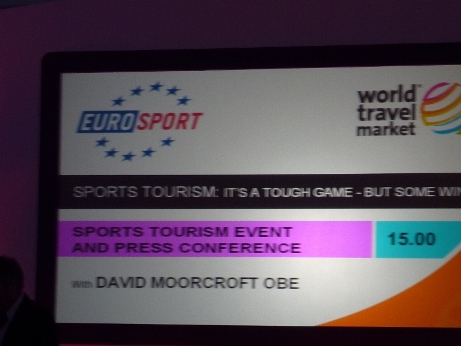 One of the world's largest travel trade shows, the World Travel Market, is currently underway in London. This year there has been a greater emphasis on sport tourism, with an exhibitor area devoted to this tourism niche, and a debate on Monday entitled 'Sports Tourism: It's a Tough Game – but Some Win', chaired by former Olympic athlete David Moorcroft. I was able to attend the debate, and a lively event it was, with widely differing opinions expressed. Perhaps inevitably with the 2012 Olympics less than two years away, the Games took centre stage, and produced the greatest differences of opinion. The question on which there seems to be perpetual disagreement is – do major events such as the Olympics and World Cups boost the tourism economy in their host cities and nations, or are they as one leading private sector body puts it, 'toxic for tourism'?

The chief sceptic for Olympic tourism was Tom Jenkins, Executive Director of the European Tour Operators Association (ETOA). On the eve of the WTM, the ETOA ran a snapshot survey of 200 leading tour operator buyers at its annual Global European Marketplace asking what effect they estimated the Olympics would have on their business in 2012 compared with 2011 in the top European inbound destinations. The following emerged:

Tom Jenkins said: "Every Olympic Games in the past has misled perceptions of what will happen. No Olympic Games has been able to estimate demand with any accuracy. Every city has believed that more foreign visitors will come than actually materialise. Thus the principal danger of a Games is the imbalance between perception and reality. The good news about these figures is that there is a sharp divergence of opinion and we are still 21 months away from the event. This gives us time to understand what might happen and to create a realistic set of criteria within which negotiations and sales can take place. So, whilst much of this survey is alarming, what it indicates is a vibrant industry searching for the right answers."

The theme of over-optimistic forecasts was continued in his presentation at the WTM debate.

"There are many good reasons for hosting the Olympics, but tourism isn't one of them," he said, referring to figures which showed the extent to which host nations had got their predictions wrong. Athens predicted 105,000 foreign visitors per day but got 9400. In Sydney, hoteliers expected 132,000 visitors a day; in reality there were just 18,300. He also said that there is often a 40% slump in hotel occupancy before and after the Games, and that those visitors who do come for such sporting mega-events don't do the sort of things other tourists do, making e.g. theatres and tourist attractions a tough sell while the Games are on.

Chris Foy, who heads up VisitBritain's 2012 unit, was confident that despite the challenges, the Games would succeed on all levels. "We want London 2012 to be a future benchmark for other host countries," he said.

As argued by Roshene Singh, Chief Marketing Officer for South Africa Tourism, the effects of a sporting mega-event must be judged in the long-term, accounting for improvements to infrastructure which (rightly or not) would never have occurred if not for the impetus of the event, and in improved awareness and perception of the destination as a result of hosting a successful event. Marketing must build on the event rather than just focussing on the short period of competition, and Chris Foy said that Vancouver kept half it's marketing budget for use after this year's Winter Olympics in order to keep up the momentum gained by the Games.

What became clear in the debate was not just that there are valid arguments on both sides, but that there is no simple model which can apply for all events. The effects of any major sporting event such as a World Cup or Olympic Games will depend on the particular characteristics of both the event and the host city or nation. Thus Germany and South Africa achieved a much better perception for the host nation in the world after hosting the 2006 and 2010 FIFA World Cups, whereas speakers from Austria and Switzerland said that the 2008 European Soccer Championships were already forgotten and would leave no lasting legacy.

Much of the strongest independent evidence does seem to be on the side of the Olympic cynics. While sport tourism organisations issue quotes saying that "tourism has dramatically increased" following the Sydney Olympics, figures presented by Tom Jenkins on Monday showed that tourism to Australia decreased each year between 2000 and the next Games in 2004, while over the same period New Zealand achieved a year-on-year increase. WTM Chairman Fiona Jeffery is one figure that has been won over to the ETOA position since last year's Travel Market, and now says "What isn't right is that the industry is fed with lots of inspiring statistics that don't end up becoming reality".

Maybe the optimistic forecasts that can never be achieved are where much of the problem lies. To justify the huge sums being spent on events like the Olympics, organisers have to promise economic gains, and it may even be that bids which don't make such claims stand little chance of winning the events in the first place. But as Tom Jenkins said, tourism doesn't need to be one of the reasons to hold an Olympics. There are the infrastructure improvements, boosts to national brand, and less tangible things such as a 'feel-good factor' that sport can produce – particularly if, as is often the case, the host nation performs better than ever before.

Without having the exact quote to hand, maybe those of us in the UK should try and embrace the outlook that Tom Jenkins expressed during Monday's debate. We're going to have a £10 billion party – so enjoy it.

CABI's Leisure Tourism Database has over 1000 bibliographic records on the Olympic Games, including many on both sides of the argument on economic and tourism impacts. A small selection is given below.