The market triumph of ecotourism? 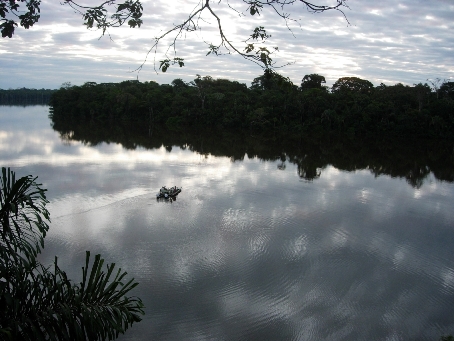 As Editor of CABI's Leisure Tourism Database, I get to keep up to date with news and research in the leisure and tourism industry. It's always of interest to follow developments in places I've been to, so my attention was grabbed last week by an email from the University of East Anglia regarding research in the rain forest of Tambopata, Peru, where I spent a couple of days four years ago at the end of a Peruvian holiday. The paper the email was about is titled 'The market triumph of ecotourism', and compares the value of rain forest tourism in Tambopata with that of other possible land uses. Can ecotourism really be the saviour of the rain forest? Read on for more details.

With demand for timber, and for land to grow crops for food and fuel, the pressure on the world's remaining natural areas such as forests and grasslands is enormous. One of the reasons commonly given for justifying the establishment of protected areas is to profit from ecotourism. Tourism, despite some of the problems it can create itself in disturbance to wildlife, use of resources and creation of waste, is often seen as the best hope for biodiversity conservation by giving an economic value to habitats and wildlife. But there are relatively few studies which compare the economics of tourism with other uses of rainforests. The research in Tambopata, just published in PloS ONE, does just this. The researchers claim that tourism is the most profitable use of the area, and that the profits of ecotourism can and should be used to guard against habitat loss and over-exploitation in some of the world's most vulnerable environments.

The team of researchers, from the University of East Anglia, the Kunming Institute of Zoology in China, and the Universidade Federal de Minas Gerais in Brazil, analysed financial data from an important cluster of lodges in Tambopata, a popular ecotourism destination since the 1970s, to learn about the sustainability of income generated and its impact on the local area, particularly in relation to conservation.

The researchers found that ecotourism was the most valuable use of the land for the local economy (more so than alternatives such as farming). The paper compares net-present-values (NPVs) of profits (a measure of private benefits) and producer surplus (a measure of social benefits) over a 25-year period for a variety of land uses, including timber extraction, agriculture, and various combinations of land use. The analysis shows that ecotourism is one of the two most privately profitable uses of rainforest in Tambopata, the other being unsustainable, selective logging, and is more profitable than agriculture. Using the broader, social measure of value, producer surplus, ecotourism is the single most valuable use of rainforest in Tambopata, because of the high fixed costs inherent in running a tourism operation, which benefit the local economy via wages and spending. In addition to this, the associated protection of the forest ensures storage of Carbon in significant quantities, more than compensating for the emissions released by tourist travel.

"In the area that we studied, a third of the revenue from tourist lodges was spent in the local economy, and the after-tax profit margin was at least 14% and increasing. High profitability and new land tenure rights have created an environment where the industry can act as an independently financed partner to the conservation community," said Christopher Kirkby, the study's lead author.

"In Amazonian Peru, this has proved vital to efforts to save the rainforest. If the profitability we observed there applies globally, diverting just a small percentage of ecotourism profits to conservation could more than double current funding made available to the developing world for such projects."

Looking forwards, the high value of ecotourism-controlled land can be used to guide decisions 'on the margin.' For now, allowing more lodges to be built or more land to be put into ecotourism concessions, even at the expense of local agriculture, can be justified, as is continuing to protect the local protected areas, including parts not suitable for ecotourism lodges where deforestation would reduce the attractiveness of the overall area for tourism. However, the authors do say that while ecotourism currently outcompetes alternative uses of forest land in terms of the economic benefits generated from marketable products, this might not always be the case. In the future, the pre-eminence of ecotourism might only be sustained if ways are found for ecotourist operators to capture the non-market benefits of their operations, perhaps through some form of payment for ecosystem services.

Of course, the analysis depends on the particular circumstances of the Tambopata region. A short rainforest visit has become a popular extension to tours which visit Peru primarily for other key attractions such as Machu Picchu and Lake Titicaca, and Tambopata would not be so successful without these other attractions first drawing international tourists to the country. It depends on the nearby airport at Puerto Maldonado, from where many of the lodges can easily be reached by river. And as potential tourist numbers are finite, then the protected area could not be extended indefinitely before the income generated per hectare from tourism fell below that from logging and agriculture. Nevertheless, the analysis does show that there are good economic regions for protecting some areas of ecosystems such as rainforests, for the purposes of tourism, even before other benefits such as carbon sequestration (or conservation for it's own sake) are considered. Ecotourism is not a panacea that can protect unlimited forest land – but for certain specific areas, it can give a measure of security for the diversity of the forest.

The reference for the Tambopata study by Kirkby et al. is:-