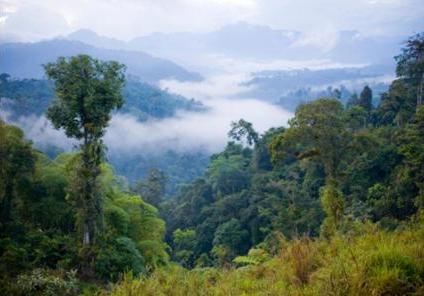 Scientists from Harvard and São Paulo University (USP) carried out a research to try and find out how the planet’s climate was before the industrial revolution. For this they were searching for the purest air in the planet and found it in the atmosphere above the Amazon rainforest. The study is crucial to understand cloud formation and, ultimately, changes in the climate.

To make predictions about future climate, it is fundamental to understand the past and present climate, explained the study coordinator, Paulo Artaxo, from USP. The Amazon is one of the few regions in the world, the other being the Antarctic, where it is still possible to find atmospheric conditions similar to those before the Industrial Revolution, i.e. before pollution.

Artaxo explained that the aim of the investigation was to understand the mechanisms of cloud formation in an atmosphere free from pollutants. This is important to find out how the atmospheric conditions will be in respect to cloud formation and precipitation if the temperature of the Amazon region increases in future with global warming.

The scientists used 40 metre high towers and sophisticated sampling equipment and managed to isolate aerosols in pristine conditions for the first time. In the Amazon basin in the area north of Manaus, the concentration of suspended particles formed in the Amazon ecosystem was 200-300 per cm3 and the samples were free from any anthropogenic influence. This figure is typically tens of thousands in an industrial region.

Atmospheric particles are essential for cloud formation; it is around these that the nucleus begins to gather and group to form clouds. In a polluted atmosphere, clouds form from pollution particles. In the Amazon, the particles in the atmosphere are formed in the atmosphere, as opposed to being emitted from anthropogenic sources, as is the case in the cities. Before this latest research, it was believed that the forest emitted these particles, but now it is clear that the particles in the Amazon atmosphere are secondary particles formed from gaseous compounds emitted by the vegetation.

If the forest is cut down and replaced with pasture we will lose the most important mechanism of cloud formation in the Amazon basin, because pasture plants do not emit these volatile organic compounds, which form clouds, explained Artaxo. However, if the forest is maintained as forest, with the warming of the planet, as predicted by models, the rate of conversion to particles of these gases emitted by the vegetation will increase and more clouds will form. This does not mean more rain, as rain depends on the water vapour flux. However, more importantly, this increase in clouds over the Amazon will help to cool the Earth because these clouds are white and, therefore, will reflect the solar radiation back into space, a mechanism which would help to balance the temperature in the Amazon region, at least.

The results of the study were published in Science and will be incorporated in models to predict the future of the Amazon.