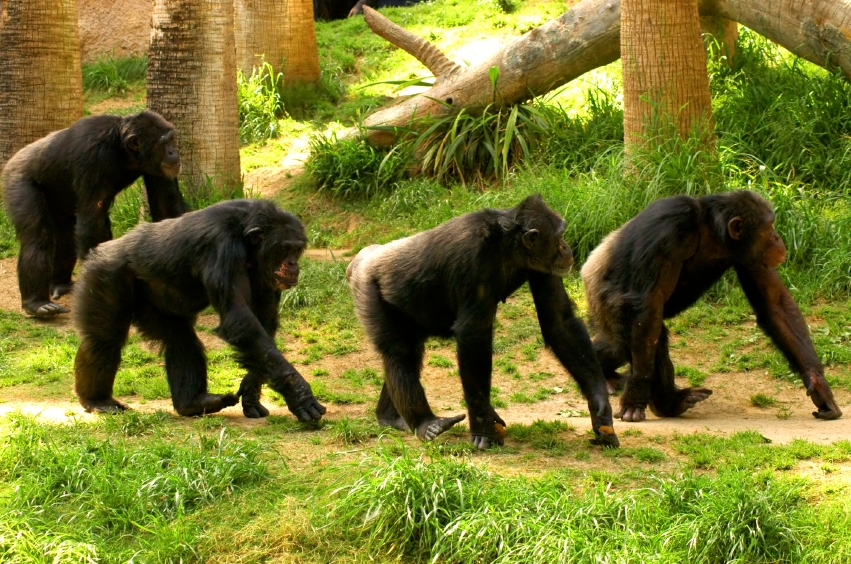 Across Africa, people often lay snare traps to catch bushmeat, killing or injuring chimps and other wildlife. But a few chimps living in the rainforests of Guinea have learnt to recognise these snare traps laid by human hunters. More surprisingly, the chimps actively seek out and intentionally deactivate the traps, setting them off without being harmed.

The discovery was made by primatologists Mr. Gaku Ohashi and Professor Tetsuro Matsuzawa, of the Primate Research Institute at Kyoto University, Japan, who were following chimps living in Bossou, Guinea to study the apes' social behaviour. While researching the chimps, they observed five male chimps attempting to break and deactivate snares. On two occasions witnessed, the chimps successfully deactivated the traps set for them.

Snare injuries to chimps are reported at many sites across east and west Africa where chimps are studied, with many animals dying in the traps. However, very few snares injuries have been reported among chimps studied at Bossou, which is unusual as the chimps live close to human settlements and snares are commonly laid in the area.

In the journal Primates, the researchers describe six separate cases where chimps were observed trying to deactivate snares. Mostly, the chimps grasped the snare stick with their hands, shaking it violently until the trap broke. Sometimes a chimp lightly knocked the sapling that holds the snare, before grasping it to break the trap. But in all cases, they avoided touching the dangerous part, the wire loop.

The researchers speculate that the chimps may have learnt how the snares work by observing them over time, and this information has been passed down generations. During one case, a juvenile male watched an adult male deactivate a snare, before then moving in to handle it once it was safe.

For the full story, and to view a video of chimpanzees moving snares, go to BBC Earth News: Wild chimps outwit human hunters.