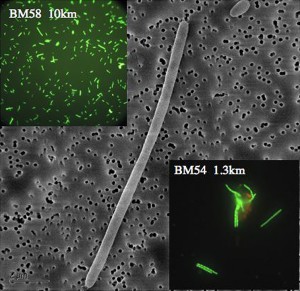 Microorganisms were the first living things in the planet. They are very versatile and are able to replicate rapidly. They even exchange genes – for example bacteria can exchange genes between different species. These features allow them to adapt and survive in new environments fairly quickly. Bacteria and archaea are the most abundant and diverse organisms on Earth, being present in all environments, even at extreme temperatures. They are literally everywhere – even our bodies are homes for many microbes!

We all know that a lot of diseases are caused by microorganisms, bacterial infections, for example. However, there is a lot of good that comes from these microscopic creatures too. The latest good is the recent news that a microorganism might be the main agent causing the Gulf of Mexico massive oil spill to be degraded far more rapidly than anyone expected.

Scientists at the Lawrence Berkeley National Laboratory in the USA have reported in an article, published in Science on 26 August, that a new fast-growing species of proteobacteria from the genus Oceanospirillales, has consumed large amounts of the hydrocarbons in the oil spilled into the Gulf of Mexico. The researchers suggest the microorganisms have adapted to the cold, deep water, where the plume began and can biodegrade the hydrocarbons without significantly depleting oxygen, unlike most oil-depleting bacteria.

“Our findings show that the influx of oil profoundly altered the microbial community by significantly stimulating deep-sea psychrophilic (cold temperature) gamma-proteobacteria that are closely related to known petroleum-degrading microbes,” says Terry Hazen, a microbial ecologist with Berkeley Lab’s Earth Sciences Division and principal investigator with the Energy Biosciences Institute, who led this study. “This enrichment of psychrophilic petroleum degraders with their rapid oil biodegradation rates appears to be one of the major mechanisms behind the rapid decline of the deepwater dispersed oil plume that has been observed.”

The research group analysed more than 200 samples, collected from 17 deepwater sites between May 25 and June 2, 2010. Sample analysis was boosted by the use of the latest edition of the award-winning Berkeley Lab PhyloChip – a unique credit card-sized DNA-based microarray that can be used to quickly and accurately detect the presence of up to 50,000 different species of bacteria and archaea in a single sample from any environmental source, without the need for culturing. Use of the phylochip enabled Hazen and his colleagues to determine that the dominant microorganism in the oil plume is a new species, closely related to members of the Oceanospirillales, particularly Oleispirea antarctica and Oceaniserpentilla haliotis.

I have always been fascinated by microorganisms and the amazing things they can achieve. During my PhD, I was looking for microorganisms capable of breaking down noxious compounds, especially hydrogen sulphide (H2S), that causes odours in air streams from wastewater treatment plants. I found plenty of microorganisms who would happily use H2S as a food source – Thiobacillus thioparus being the keenest. In fact, I found that microorganisms could degrade the noxious compounds, once dissolved, much faster than chemical processes alone.

I have made a few searches in Cabdirect to show examples of useful microbial achievements, for those who subscribe to the database:

Others such as Rhizobia, fix nitrogen fixing in soil.

Also check out the review in Cab Reviews ‘Functions of microbial communities and their importance to soil’, by P.Nannipieri.

By the way, if you search microorganisms or microbes in the database, you will get over 240,000 hits.