Why do referees sometimes get it wrong?

I think everyone would agree that soccer referees have a very difficult job. They have to keep a close eye on a fast-moving game in which incidents often occur away from the ball, and need to make decisions in an instant which in high-profile games will be endlessly dissected by pundits and fans – sometimes for years to come – who have been able to replay the incident from every conceivable camera angle. But are there any factors contributing to errors or perceived bias in refereeing decision, and if so is there anything that can be done about them? 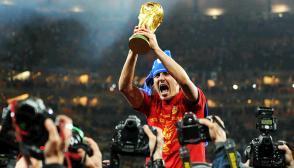 Referees have once again been a major talking point at the just-finished FIFA World Cup in South Africa. Notable errors from earlier in the tournament include a goal scored by Carlos Tevez for Argentina against Mexico when he was clearly offside, and the failure of the referee and his assistants to give a 'goal' scored by Frank Lampard for England in their defeat against Germany when the ball was clearly well over the line. In the final, the performance of English referee Howard Webb has been strongly criticised by the Dutch coach (though most observers would probably agree that this was a very hard game to referee, and that some of the Dutch players were probably fortunate not to be sent off in the first half). So it is worth looking at the behaviour of referees and what factors about the job – and the human brain – may affect their decisions.

There is a small but growing literature on soccer refereeing, and a new addition to that research has appeared this month (PloS ONE, 2010, 5 (7): e11667). Soccer referees may have an unconscious bias towards calling fouls based on a play's direction of motion, according to a new study from the of University of Pennsylvania School of Medicine. Researchers found that 'soccer experts' (not professional referees it has to be said, but members of American student teams) made more foul calls when action moved right-to-left, compared to action, suggesting that two referees watching the same play from different vantage points may be inclined to make a different call.

In matches, referees and linesmen tend to be exposed to different quantities of right-to-left or left-to-right attacking plays, as referees employ a system to help them cover the field efficiently. Referees are encouraged to use a diagonal patrolling technique, choosing to run either a left or a right diagonal. Given the relational opposition, the authors suggest that referees should avoid switching diagonals at halftime.

"There could be an unfair advantage if one team goes into halftime with a lead and the referees switch to a right diagonal system in the second half, favoring both defenses," said lead researcher Alexander Kranjec. "However, because referees viewing leftward action may be more likely to see a foul when no foul was actually committed, as seemed to be the case when the referee disallowed what should have been the US team's third goal against Slovenia, the bias could work against the offense sometimes."

The conclusion to the paper on PloS ONE claims that "the effects of low-level perceptual mechanisms could alter a decision, change the result of a game and perhaps, the fortunes of nations". Dramatic sounding stuff – but perhaps this morning the Dutch coach wouldn't think the possible effects are over-stated.

A number of previous papers have examined possible sources of referee bias. Quaquebeke and Giessner (2010) suggest that people are more likely to attribute a foul in an ambiguous tackle situation to the taller of two players (reason for England not to play the 6 ft 7 in Peter Crouch?). Possible bias to the home team has been examined in papers including Dohmen (2008), Johnston (2008) and Dawson et al. (2007). Unkelbach and Memmert (2008) discuss how referees are less likely to award yellow cards early in the game, while Jones et al. (2002) consider whether the reputation of a team for being aggressive may affect how likely they are to be penalised.

Groot (2005) said that referees are among the most important 'players' in international soccer tournaments, and presented suggestions for minimizing the impact of referees on the outcome of matches. After a World Cup in which referees again made a number of contentious decisions, ways of improving referee training, and helping them with certain decisions (for example with the use of technology to determine whether the ball has passed the goal-line) will once more be under the spotlight.