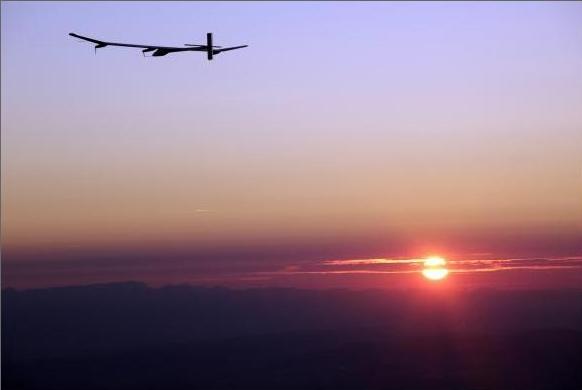 Power an airplane, of course! A team of Swiss engineers, led by Mr. Andre Borschberg and fellow aviator Bertrand Piccard, have been doing just that for the past few years – building an airplane powered entirely by sun energy, which they named ‘Solar Impulse’. The airplane has 12,000 solar cells arranged on its wingspan and the cells collect enough sun energy to power the plane’s batteries for the flight. Read on to find out more about the flight.

The experimental four-engine solar-powered aircraft was launched for its longest yet flight yesterday and was piloted by former fighter jet pilot Borschberg. It has landed safely in Switzerland this morning, after flying successfully for 26 hours, including flying through the night for the first time.

Previous flights of ‘Solar Impulse’ have included a brief "flea hop" and a longer airborne test earlier this year. This week's attempt, however, was described as a "milestone" by the team. "It's the first time ever that a manned solar airplane has flown through the night," Mr. Piccard told journalists.

"That was the moment that proved the mission was successful, we made it." The plane emerged from the dark night with three hours power remaining in its batteries, which is more than they had expected. "Nothing can prevent us from another day and night, and the myth of perpetual flight."

The team will now build a new and more advanced model of the plane and aim to circumnavigate the globe by 2013. Solar power offers a "greener" and safer alternative to traditional energy sources such as fossil fuel. Let’s hope we’ll be flying on solar-powered airplanes for our holidays abroad in the near future, as long as they sort it out so that there won't be a need for manpower to steady the wings when it lands.

From this and my previous blog on ‘what can you do with 12,000 plastic bottles’, it seems as if my blogs will be on the 12,000 theme from now on, but it was just a coincidence. I think I would struggle to find 12,000 things to blog about every week.

BBC news item on the flight.

I also searched the CAB Direct database for other uses of “solar power” and found 165 items.

Close up of Solar Impulse – image from solarimpulse.com