The vulture population in South Asia has declined catastrophically in the last 2 decades, with population decreases since 1992 reported to be over 97% (Senacha et al., 2008). With populations of three of the Asian vulture species decreasing from the 'tens of millions' to less than 60,000 for all species combined, the decline has been said to be faster than that which took place in the famous extinction of the dodo. But in the International Year of Biodiversity there is finally a little good news for Indian vultures, with news that three species have now successfully reared young in a captive breeding centre. 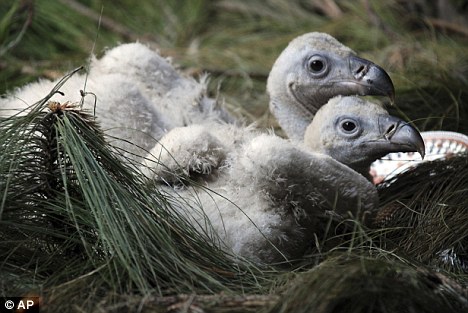 Now vultures may not be everyone's favourite bird, with an image tainted by movie scenes of them circling travellers lost or injured in the desert, waiting for them to die before moving in to feed on the carcass. But they have a valuable ecological role, and in the Indian subcontinent were used by livestock farmers as the traditional way of disposing of carcasses. It is that use which has proved to be their downfall, with the anti-inflammatory livestock drug diclofenac reported in 2004 to be a major cause of the population crash. A vulture will die of acute kidney failure within a few days of consuming meat from the carcass of livestock recently treated with the drug, and mathematical models have shown that even a small proportion of carcasses containing a lethal level of diclofenac can trigger a dramatic population crash (Green et al., 2004).

Since that first proven link, India, Pakistan and Nepal have banned the manufacture of diclofenac for animals in their countries. But it has been reported that farmers have been buying the drug as it’s packaged for humans and using it for animals, and that alternatives such as ketoprofen may also be harmful to the birds.

Chris Bowden, of the RSPB, said: “The crisis facing vultures is one of the worst facing the natural world.  Since the declines of these birds was first noticed, the speed at which they have gone is terrifying – and these birds played such an important role in cleaning up carcasses  and the environment."

“Although we may never again witness the sheer abundance of vultures across southern Asia, the latest news provides hope that we may, at least, be able to prevent the total extinction of these birds.”

Asad Rahmani is the Director of the Bombay Natural History Society, which along with the RSPB is one of the members of the conservation partnership trying to save the vulture. He said: “Quickly building up the important captive stock so they can be released within a few years is crucial. But this will also depend on eliminating diclofenac from veterinary and farming practice and this still needs a big effort from everyone.”

A search of the CAB Direct database for 'vultures and diclofenac' finds 41 bibliographic records, from early reports in 2004 (Green et al.; Schultz et al.) to more recent papers which look at additional factors which may be impacting vulture populations such as malaria (Poharkar et al. 2009), and habitat loss and disturbance (Chhangani, 2009; Kushwaha and Kanaujia, 2009). So even if the use of diclofenac in livestock can be stamped out, there may still be other threats to those birds which do remain in the wild: but at least the captive breeding success gives some hope for saving these endangered species from extinction.