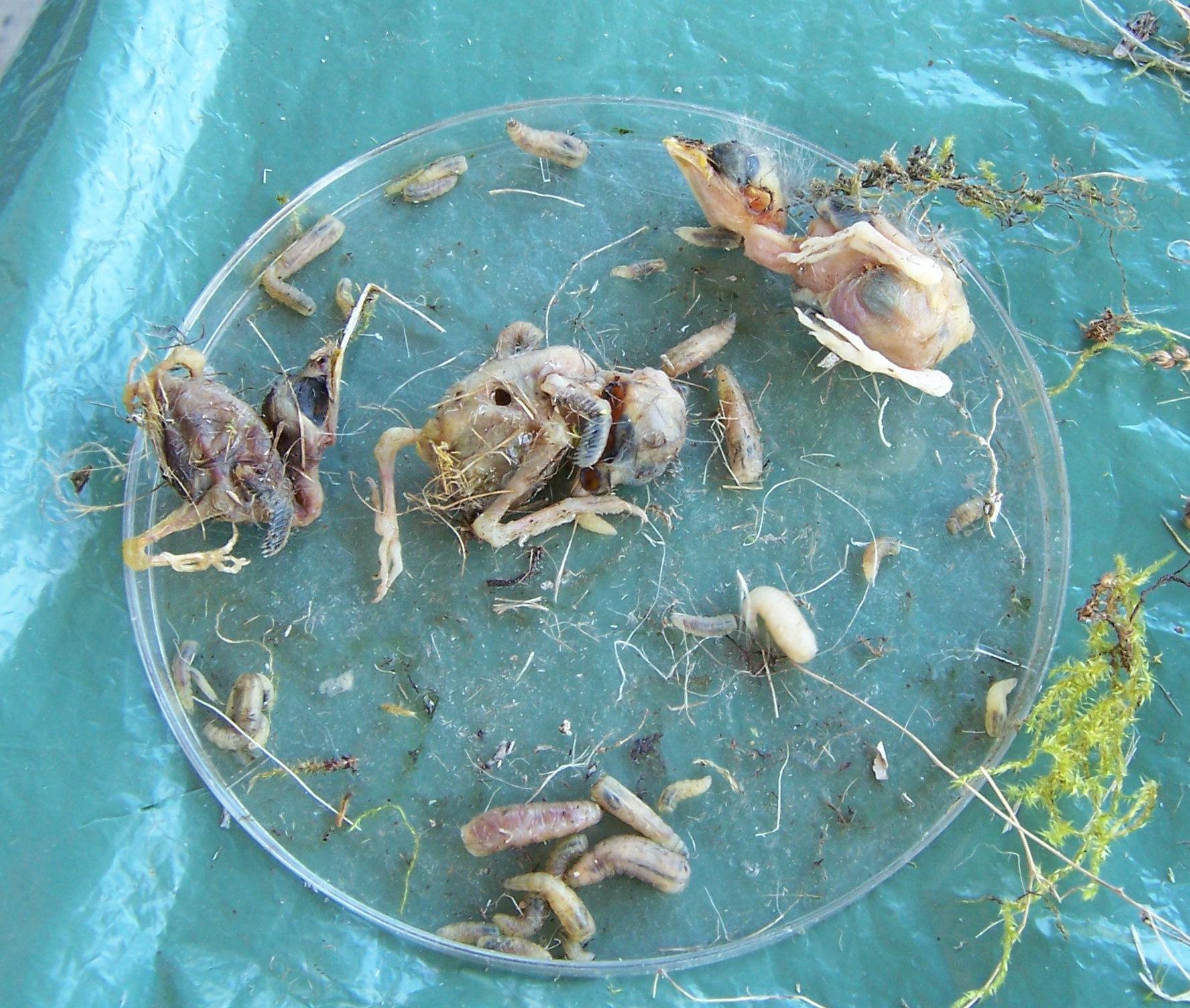 
As mentioned in another entry on this blog a few weeks ago, 2010 has been declared International Year of Biodiversity by the United Nations. Continuing this theme, here is a guest entry by Jody O’Connor
and Sonia Kleindorfer of Flinders University BirdLab, Adelaide, Australia, who have contributed to CABI's Invasive Species Compendium, and who recently returned from the Galapagos Islands where they work on an invasive threat to some famous endangered species.

Parasitic, bloodsucking larvae of an introduced fly, Philornis downsi, are killing Darwin’s finch nestlings in the Galapagos Islands. Adult Philornis flies lay eggs in birds’ nests that hatch into free-ranging larvae and proceed to feed on the blood and tissues of nestling birds (1). The fly has spread to at least 12 of the 14 main islands in the Galapagos (2, 3), and its larvae are found in up to 100% of finch nests in some habitats such as the highland forests of Floreana Island (4, 5). Philornis parasitism is a real and imminent threat to the survival of rare and range-restricted species such as Darwin’s mangrove and medium tree finch, which are also affected by introduced nest predators (mainly rodents) and habitat degradation (4, 6). In 2009, the IUCN redlist status of the medium tree finch was re-evaluated from “vulnerable” to “critically endangered” because Philornis parasitism causes mortality in over 40% of its nestlings, and its sole population in the highlands of Floreana Island is small and declining (4, 7). The 15 species of Darwin’s finches in the Galapagos Islands are primary examples of natural selection in action (8), and as iconic to the field of evolutionary biology as Newton’s apple is to physics (9). It is now imperative that we develop control programs for introduced parasites (Philornis), predators (rodents) and diseases (eg pox virus) before Darwin’s finch species start going extinct (4, 6, 10).

The 2010 rainy season in the Galapagos Islands (Jan-April) was the wettest on record since the El Nino year of 1998. Plant and insect life were abundant, thus providing ample resources for the prolific finch breeding that followed. Under such “perfect” finch breeding conditions, finch nesting was particularly dense, and pairs would renest and lay eggs repeatedly over the season. Unfortunately for Darwin’s finches, Philornis parasites are also more prevalent in years with high rainfall (11), and 2010 was no exception: on Floreana Island every nest contained Philornis, with an average 40-60 larvae per nest.

In 2010, Philornis parasitism was responsible for the highest nestling mortality in Darwin’s finches since we began our observations in 2000 (11, 12). On Floreana Island, we followed 45 nests of four Darwin’s finch species (small, medium and large tree finches, and small ground finches), from which only one nest produced any fledglings. One third of nests were predated during the incubation stage (eggs), and of those that hatched 98% of nestlings died due to Philornis parasitism. A study on Santa Cruz Island (Clayton Lab, University of Utah) found similarly high levels of nestling mortality (pers. comm. Clayton, Koop, and Knutie). Dead nestlings were always found with signs of larval feeding: flesh wounds, infections, “eaten-out” bodies, and enlarged nasal cavities (larvae enter through the beak to feed internally (see 3 & 13). Small surveillance cameras were placed inside nests and showed that throughout the night, masses of larvae emerge from the nest base to feed on the flesh of nestlings (see 3).

Darwin’s finches rely on wet years to reproduce and boost population numbers. What we have found is that Philornis parasitism is now so high in wet years that reproductive success and hence recruitment is comparably low to levels found in years of low rainfall. For example, in the exceptionally dry years of 2004 and 2005 in the Galapagos, very few finches were observed to breed at all and over 90% of nests failed, mainly due to predation and Philornis (5, 14). Right now, it is still possible to see large numbers of Darwin’s finches in the Galapagos. But if the currently low levels of recruitment continue, it is likely that we will observe significant population crashes in the near future. We have ample evidence that changes in rainfall patterns will affect host nesting density, parasite density, mortality patterns, and foraging behavior of the finches (4, 5, 15-17).

So, how do we get rid of, or at least control, Philornis downsi? The Flinders University BirdLab and scientists at the Charles Darwin Research Station have trialed the use of various traps and lures with limited success. Current research is focusing on the use of avian pheremonal attractants to lure flies into traps (Syracuse University, USA).

The development of a control method for Philornis is now critical for the conservation of Darwin’s finches. We recommend further research into short-term trapping methods and long-term eradication using biological control or methods such as the sterile insect technique. The Charles Darwin Research Station and Galapagos National Parks are also working on other important issues for Darwin’s finches such as habitat degradation (invasive plant & feral goat control) and rodent predator control (using poison baits), which also need continued research and effort.

6. Fessl B, Young GH, Young RP, Rodriguez-Matamoros J, Dvorak M, Tebbich S, Fa JE. 2010. How to save the rarest Darwin's finch from extinction: the mangrove finch on Isabela Island. Philosophical Transactions of the Royal Society B. 365:1019-1030