Bad times for bees and the budget! 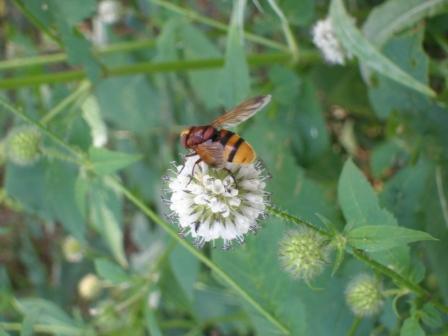 The first UK government budget is out today and, just as importantly, this week is National Insect Week. Continue reading to find out why, just as the UK budget, bees and other pollinators are going through tough times.

Honeybees, bumblebees, hover-flies, wasps, moths and butterflies play a vital role in food production through the pollination of crops. However, their numbers have declined over the years and there is no single factor that can explain this decline, said Professor Andrew Watkinson, director of the Living with Environmental Change Programme, speaking at a news briefing at the Science Media Centre. Scientists have estimated that if bees and other pollinators were to disappear completely, the cost to the UK economy could be as much as £440m per year, which amounts to about 13% of the country's income from farming. I'm not an expert on the UK economy, but no bees would surely mean an even worse future government budget. What is being done to halt the pollinators’ decline?

In a bid to save the declining insects, up to £10m has been invested in nine projects that will explore threats to pollinators. The Insect Pollinators Initiative will look at different aspects of the insects' decline. The initiative brings together specialists from a number of UK universities, as well as from the Food & Environment Research Agency, the Natural Environment Research Council's (NERC), and the Centre for Ecology and Hydrology. It is funded by several public and charity organisations, led by the Biotechnology and Biological Sciences Research Council (BBSRC). Some projects will look at factors affecting the health and survival of pollinators in general, while others will focus on specific species and diseases.

Prof Watkinson said that the new initiative allowed them to bring in new skills in gene sequencing and epidemiological modelling with the expertise that already exists in the pollinator research community. “There's a whole range of stresses such as agriculture and land use change, disease, environmental change and pesticides," he said. To tackle a complex problem like the decline of pollinating insects, where there are a number of potential causes, requires wide-ranging research. " Bumblebees have declined worldwide, largely due to the loss of flowers and other habitats they need to survive. It's really difficult to quantify the extent of the decline of pollinators and that's one of the problems we really need to address. What we need is some robust science and I think that this programme is going to provide it."

Claire Carvell from the Centre for Ecology and Hydrology said that, since the 1970s, there had been a 75% decline of butterfly species in the UK. Also, out of 25 species of bumblebees, three had gone extinct, she added. These "extra special" bees with large hairy bodies are very effective at transferring pollen between flowers, she added. "They are also active at lower temperatures than other bees, so you'll see them out working earlier and later in the day. Dr Carvell said that her team will use a method of collecting DNA from live wild bumblebees to estimate how far queen bees fly to start new nests and how far workers fly to forage. "These findings will allow us to manage landscapes in ways that are effective in conserving bumblebee populations," she concluded.

Neurobiologist Chris Connolly, of the University of Dundee, is leading research into the effect pesticides have on bees. He said that the pollinators' decline could be partially explained by a brain disorder, triggered by chemicals in pesticides. A single pesticide is not likely to be responsible… but a cocktail of different pesticides might have a combined effect to amplify the brain problem. His study will concentrate on identifying these dangerous combinations in order to advise farmers about how to avoid them in the future. In particular, his team will assess any possible damage to the insects' abilities to gather food, navigate and even perform their special "waggle dance", which they use to let other bees know where nectar can be found. It will include fitting tiny radio frequency ID tags to pollinators, which will act like "barcodes at the supermarket", recording when insects enter and leave the nest.

Other projects include investigating the ecology and conservation of pollinators in cities, researching the impact of a mite named Varroa destructor, and looking into the effects of agriculture on bees.

The vital thing, Professor Watkinson stated, is for the scientists to communicate the results of their studies to the people in the field, such as bee-keepers and farmers. "It is imperative that the science that's being done is fed through as quickly as possible to the conservationists and to the agricultural community, so that we can ensure food security and also the maintenance of our biodiversity," he said.

Now we know how important pollinators are to our food production and how they are in decline, next time a bee, hover-fly, wasp, bumblebee or moth comes into your house, don’t just kill them, but encourage them into the garden instead!

Visit the CABI page, which this week is dedicated to National Insect Week.