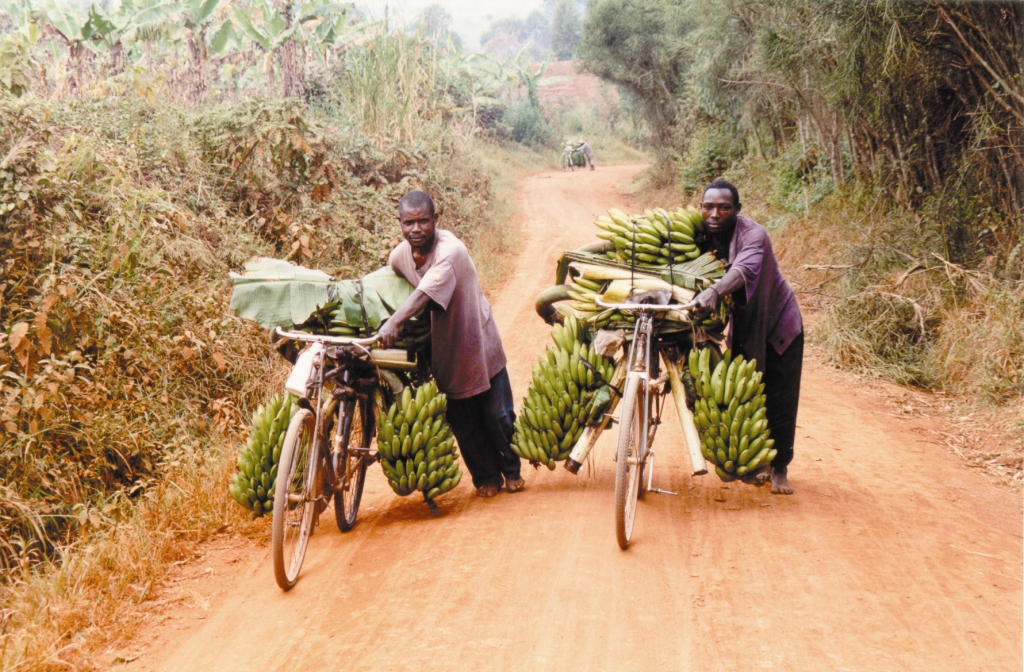 As Vera pointed out in her blog yesterday, this Saturday (22 May) is the International Day for Biodiversity. The theme for this year is ‘Biodiversity, Development and Poverty Alleviation: Recognizing the Role of Biodiversity for Human Well-Being’. Poverty alleviation is something we feel strongly about here at CABI where our mission is to “improve people’s lives worldwide by providing information and applying scientific expertise to solve problems in agriculture and the environment.” We aim to help farmers grow more and lose less by improving crop yields, safeguarding the environment and improving access to agricultural and environmental scientific knowledge. This years theme is closely linked to Milennium Development Goal 7 on environmental sustainability which aims to “Integrate the principles of sustainable development into country policies and programs and reverse the loss of environmental resources” (target 7A) and to “reduce biodiversity loss, achieving, by 2010, a significant reduction in the rate of loss” (target 7B).

The Secretariat of the Convention on Biological Diversity has produced a really informative booklet about this years theme which tells us all about how biodiversity underpins human well-being, development and poverty reduction.

As the booklet says, 70% of the world’s poor live in rural communities and depend directly on biodiversity and ecosystem services for health and nutrition, for crop development, and as a safety net when faced with climate variability and natural disasters. Urban dwellers the world over depend on water provision and purification performed by forests and wetlands. Healthy ecosystems like forests and bogs contain massive carbon reservoirs and are vital to regulating the global climate.

The most important threats to biodiversity have long been habitat loss, due to large scale conversion of land to agriculture and urban centres, introduction of invasive alien species, overexploitation of natural resources, and pollution. Now climate change is adding to these pressures. In the last century we have lost 35% of mangroves, 40% of forests and 50% of wetlands. Due to human actions, species are being lost at a rate that is estimated to be up to 100 times the natural rate of extinction – this has led some people to argue we are now in the middle of another mass extinction event. 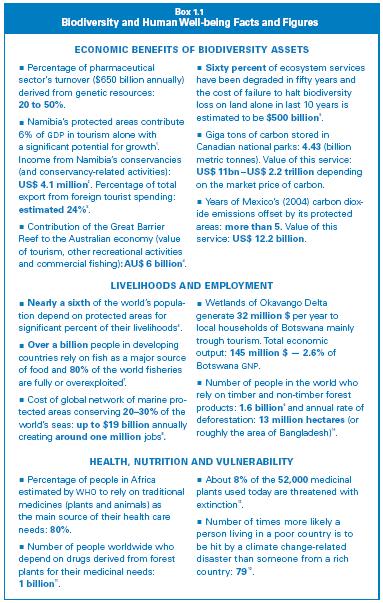 The table to the right, taken from the booklet mentioned above, nicely summarises the benefits of biodiversity for human well-being (click on it to see full size).

At the level of genetic diversity, crop genetic diversity is humanity’s key to maintaining crop resistance to pests and diseases, and to adapting agricultural systems to climate change. As the basis for the development of new crop varieties, and for the improvement of existing ones, genetic diversity will become increasingly important to food security at different scales. For example, the majority of bananas we see in our shops are the ‘Cavendish’ cultivar, which has extremely low genetic diversity due to monogenetic cultivation driven by short-term commercial motives. This makes bananas very vulnerable to an outbreak of a pest or pathogen species that targets that particular cultivar, threatening both commercial cultivation and small-scale subsistence farming. It is unclear if any existing cultivar can replace Cavendish, so various hybridisation and genetic engineering programs are attempting to create a disease-resistant, mass-market banana.

In terms of human health and diseases, the importance of biodiversity in mitigating these is clear. Various studies show that:

Three quarters of the world population depend on natural traditional medicine from plants. Hundreds of these plants are threatened with extinction. For example, the 500 acre Atlantic Forest reserve surrounded by the Brazilian city of Joao Pessoa harbors over 480 medicinal plants in addition to providing some 10% of the city’s water supply.

Species of crops and livestock and their genetic diversity are the basis of agriculture. Crop genetic diversity provides the materials for human societies to adapt to climate change. Species of earthworms, fungi, soil micro-organisms, flora and fauna surrounding agricultural areas underpin ecosystem services that sustain agriculture, such as pollination and nutrient cycling. For example, shade grown coffee is planted among canopies of native tropical trees and vegetation that provide the habitat for songbirds, bats and numerous other species. The trees and vegetation also provide fruits and other products that allow farmers to diversify their diets and incomes. The nutrient cycling, erosion prevention and water retention services of tropical vegetation allow coffee to be cultivated with little need for chemical fertilizers and herbicides.

So what is CABI doing to help protect global diversity? Here are a few of the areas we work in:

Find out more about CABI’s development and research projects that contribute to improving protecting biodiversity:

To mark the International Day for Biodiversity we're
giving complimentary access to over 1000 abstract records from our
Environmental Impact Internet Resource on biodiversity with a focus on one of
CABI's specialist areas – invasive species. To access these free records, please click here.