Cleaning up the Gulf of Mexico oil spill? 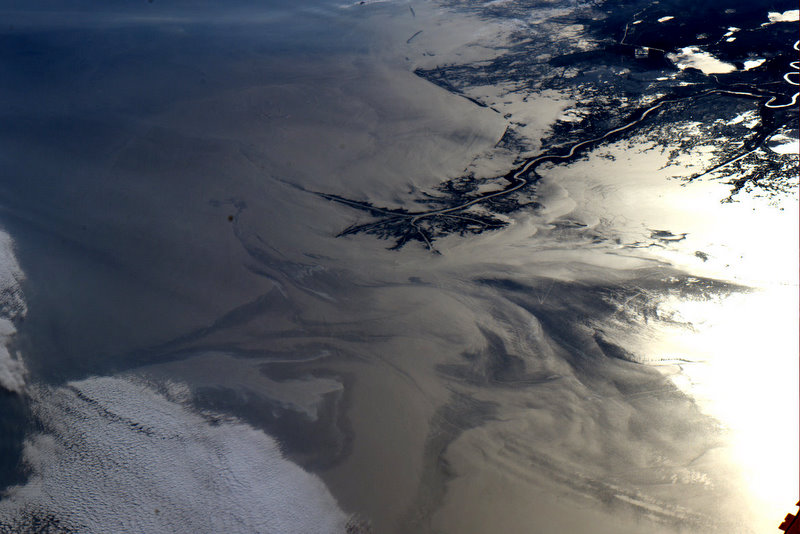 Photo of oil spill of Gulf of Mexico taken 4 days ago by Astro_Soichi (twitpic.com)

This is not the first time an accident resulting in oil spill in the sea has happened. Other disasters include: the Exxon Valdez disaster in the Alaskan shoreline of Prince Williams in 1989; the cargo oil spill of tanker Volgoneft-248, which ran aground in Turkey after structural failure and spilled tons of oil into the Marmara Sea, when it broke apart at the end of 1999; the oil tanker Prestige accident in November 2002, which produced heavy contamination off the coast of Galicia, Spain; and the Hebei Spirit oil spill which occurred in December 2007 in the Taean County, South Korea. Oil slicks must be cleaned up, as they pose severe threats to ecosystems affected by the crude oil pollution, but what are the options? Read on to find out.

Options for cleaning up crude oil in the sea and shores sand include dispersants and sorbents. Chemical-based dispersants, although effective, can be another (sometimes worse) source of pollution. Natural sorbents must be the best option and one sorbent, which has been suggested during the Exxon Valdez oil spill clean up, was hair. According to an article in Yahoo News, people in the Florida Gulf Coast, where some oil slick might end up, have started saving all their waste hair from hair salons and pet groomers and are sending them to warehouses, where the hair will be used in sorbent booms or mats to soak up the oil slick. Hair can absorb four to six times its weight in oil, which is not as good as industrial booms filled with synthetic microfibres, which can absorb up to 15 times their weight in oil, but are still a good natural alternative. Plant biomass (agricultural waste) has also been suggested as a good option as a natural sorbent.

Crude oil is a hydrocarbon and, therefore, the use of microorganisms which degrade hydrocarbons is another alternative. I searched the Cab Direct database using the terms hydrocarbons and biodegradation, which returned over 4000 records. From this search results, a recent paper by Zahed et al. (2010) examined the effect of initial oil concentration and dispersant Coreexit 9500 on crude oil biodegradation in contaminated seawater. Their results showed that the presence of dispersant enhanced crude oil biodegradation and that more effective degradation was obtained with lower concentrations of crude oil (67% for 100 mg/L, compared with 45% for 2000 mg/L). Based on their findings, they concluded that bioremediation is not recommended for crude oil concentrations of 2000 mg/L or higher.

I also searched the database for “clean up” and “oil spill” to find current research on other tested clean up methods and my search returned 29 records.

Husseien et al. (2009) examined the absorption capacity of barley straw for different petroleum products and water pick up. Their results showed the capacity of straw fibres to remove crude oil from the sea water was related to the size and amount of fibre and concentration and temperature of the crude oil. Additional sorption-desorption studies showed that a simple squeezing operation was enough to remove most of the soil sorbed, making reuse of the fibres feasible. This is a useful feature of the straw fibres for use in the sea, as it would save time.

Another promising method is described in a paper (Saeki et al., 2009) by a Japanese research group which used a remediation agent (JE1058BS) that contains a biosurfactant produced by Gordonia sp., strain JE-1058. The biosurfactant showed potential as an oil spill dispersant even in the absence of a solvent and was also effective for the bioremediation of oil spills at sea. The addition of JE1058BS to seawater stimulated the degradation of weathered crude oil (ANS 521) via the activity of the indigenous marine bacteria. Its addition also stimulated the removal of crude oil from the surface of contaminated sea sand. Their results indicated that biosurfactants containing JE1058BS have a strong potential as a remediation agent for the clean-up of oil spills at sea and on shorelines.

Fertilizers were used in the summer of 1989 to accelerate bacterial growth in a bioremediation effort to clean up the beaches following the Exxon Valdez oil spill. Despite the limited data available, Lung et al. (1993) suggested it was clear that no significant increase in algal growth would be expected following fertilizer application.

From the above, a combination of treatments seems the best option to clean up oil spills. I think the initial approach used by BP, i.e. containing/collecting the spill for disposal, as shown in this Nature article, to avoid continuous movement of the crude was the right approach to start with, but this should be followed by absorption of the crude, which is already contaminating the sea, using plant biomass, such as barley straw and C. acuntum silky hairs, or indeed human hair booms, if these are more easily available. The clean up could then be enhanced by using biosurfactant, such as that produced by Gordonia, as an oil spill dispersant, followed by inoculation with indigenous marine microorganisms that degrade aromatic hydrocarbons. Coastal slurry and microbial mat samples were shown to be rich in pico-cyanobacteria, filamentous cyanobacteria and oil-utilizing bacteria. Al-Mailem et al. (2010) used slurry and mat samples directly as inocula for cleaning oily seawater in batch cultures. They showed that coastal slurry has the potential for self-cleaning of oily coasts without the need for nitrogen fertilization, and may be directly used as inocula for the bioremediation of oily liquid wastes. The combined potential of the slurry bacteria for hydrocarbon-utilization and nitrogen-fixation makes the consortia self-sufficient, as far as nitrogen requirement is concerned and the occurrence of phototrophic microorganisms also makes such consortia self-sufficient in terms of oxygen requirements.