Roasted grasshopper with a sprinkling of termites 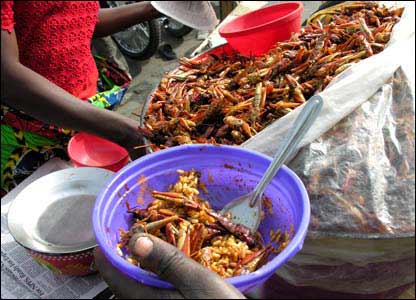 Chances are if you’re European you don’t make a habit of eating insects. When you have eaten them it was probably by mistake, maybe whilst enjoying a summer bike ride or a run. After a few seconds of coughing and spluttering and feeling personally affronted at the insect flying into your mouth without warning you probably shrugged your shoulders and carried on as normal reassuring yourself that it was probably a good source of protein anyway!

Nigerian researchers have been analysing the nutrient composition of commonly eaten insects in Nigeria, confirming that insects are indeed a good source of protein and other nutrients. They suggest that the aversion to insects as human food among Europeans is “nothing more than custom and prejudice”. According to their study published in the African Journal of Biotechnology, edible insects constitute an important part of the daily diet of a large proportion of the population in South-Western Nigeria.

The authors write: "The consumption of non-toxic insects therefore,
should be encouraged. Insects are traditional foods in most cultures,
playing an important role in human nutrition and have many nutrients to
offer. They can be reared for their high nutritional qualities and sold
to the populace that regards them as delicacies. Some of the most sought
after species, especially those with high nutritional content, ought to
be cultivated with modern techniques to increase their commercial
values and availability."

Interested in how to cook your next nutritious insect snack? Termites are apparently best gently roasted on a hot plate or lightly fried until slightly crisp; oil is not usually needed since their bodies are naturally high in oil. The finished product is sold in markets in Western and eastern Nigeria as a snack. Traditionally they make a welcome treat at the beginning of the rainy season when livestock is lean, new crops have not yet produced food, and stored produce from the previous growing season is running low.

The larvae of Rhynchophorus on the other hand can be fried, stewed, grilled or roasted. Condiments commonly added include onion, pepper and salt. Many African cookbooks carry recipes for R. phoenicis, for example, Grimaldi and Bikia's 'La Cuisine Camerounaise' (1985), which includes a dish in which they are cooked within coconut shells. Dried larvae are often incorporated into a squash seed paste. The clarified fat of the larvae also has a use as an equivalent to butter.

However, commercial cultivation of the insects with the highest nutritional content, as suggested by the authors, could prove problematic. The researchers concluded: "This study revealed that some of the insects which are pests also have high nutritional qualities.” This includes termites which can cause serious structural damage to buildings, crops or plantation forests, and the larvae of palm weevils (Rhynchophorus spp) which burrow into the crowns and trunks of palm trees. Escapees from these proposed insect farms could potentially cause population explosions of pests in nearby farms. The pest status of many of these species needs to be carefully considered, as do any potential conflicts between farmers/foresters trying to eradicate pests and local people who rely on the availability of the species as a food product.

For more information on particular pest species such as Rhynchophorus phoenicis, take a look at CABI’s Crop Protection Compendium, an interactive encyclopaedia on all aspects of crop protection.