Too much tourism traumatising dolphins 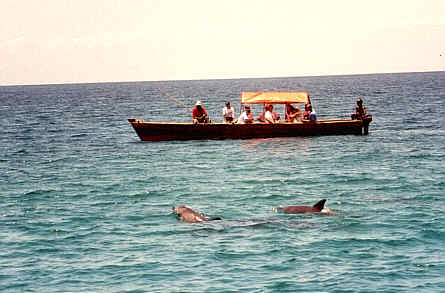 In many parts of the world, watching whales and dolphins in their natural habitat has become a vital and growing part of the tourist industry. Cetacean tourism is also often used in arguments for the protection and conservation of whales, dolphins and other iconic marine animals, by presenting a potentially sustainable source of income for coastal communities and an economically viable alternative to whaling. However, too many tourist boats, and approaching too close to the marine animals, have also been found to create disturbance resulting in behavoural changes which may be long-term and life-threatening, both at the individual and population level (Bejder et al., 2006).

The latest contribution to research into impacts of dolphin tourism has just been published in Endangered Species Research by a team of scientists led by Dr. Per Bergggren of Newcastle University, UK. The study of bottlenose dolphins living off the coast of Zanzibar has found that the many tourist boats operating in the area are harassing the animals, preventing them from resting, feeding and nurturing their young.

The research also highlighted swimming with dolphins – in particular where tourists swim in very close and try to touch the dolphins – as being incredibly stressful for the animals.

The researchers monitored activity of Indo-Pacific bottlenose dolphins and tourist boats off the south coast of Zanzibar in 2007. Behaviour and associated data of dolphin groups were sampled every 15 minutes, during interactions with tourist boats and in control situations.

Meanwhile, travelling behaviour more than doubled in proportion, from 33 to 77 per cent, becoming by far the most dominant activity state during interactions with tourist boats.

“Overall, the dolphins are using more energy than they are taking in because they aren’t resting or feeding as much but are swimming more as they try to avoid the tourist boats,” explains Dr Berggren, based in the School of Marine Science and Technology at Newcastle University.

Dolphin-watching was introduced off the South coast of Zanzibar in 1992. Today it is one of the few places in the world where tourism has completely replaced the traditional dolphin hunt – an activity which threatened the local population of around 150 bottlenose dolphins. Tourism has helped protect dolphins, as locals who once hunted them can now make a more sustainable living on tourist boats, but the research shows that the dolphin watching industry brings problems of its own.

"Unfortunately, without regulation, dolphin tourism brings with it its own challenges. The current situation in Zanzibar is unsustainable. The local community is dependent on tourism – and therefore the dolphins – but unless the activity is regulated the animals will leave."

The authors suggest that one management option may be to have fewer tourists paying more money for the dolphin experience, thus potentially lowering pressure on the dolphins without reducing economic benefits to the region. It is also recommended that the already available and issued guidelines for best dolphin tourism practice, issued by the Department of Fisheries and Marine Products in Zanzibar in 2003, are implemented.

"The problem is that any change needs to be tourist-driven" says Dr Berggren. "Many visitors will pay drivers extra in tips to steer their boats in close, herding the dolphins so they can dive right in amongst them. Our message is, keep your distance and put the dolphins first."

Research in Brazil on estuarine dolphins (Filla and Filho, 2009) shows how boats approaching dolphins 'correctly' induced no negative reactions, while close direct approaches were responsible for many negative reactions from the dolphins. Also in Brazil, Tosi and Ferreira (2009) suggest that simple rules for control of boat traffic are effective in minimizing the short term negative impacts on dolphins. However, the enforcement of common rules is a difficult compromise between community needs and vulnerability of dolphin populations. Mayes and Richins (2009) report on management and educational practices of dolphin watching operators in New South Wales, Australia.

The paper by Berggrens groups is open access, and can be found through this external link.