What killed the dinosaurs? 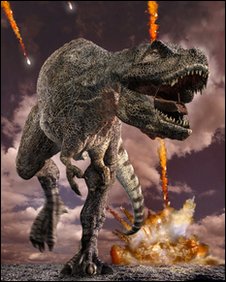 A new study presented this week at the 41st Lunar and Planetary Science Conference in Texas, USA, gives compelling evidence, which shows the most likely cause of the dinosaurs’ extinction 65 million years ago. The two main theories up to now were that a giant asteroid hit Mexico and wiped them out or that super volcanic eruptions in India caused them to die. Read on to find out what really killed the dinosaurs…

The comprehensive study by a team of 41 scientists, including Dr. Joanna Morgan, from Imperial College London, gathered data from studies conducted in the past 20 years, including evidence from fossil records, and was published in the Science Journal.

The new research effort found that the mass extinction coincided with a huge asteroid (measuring about 10-15 km across) that struck Mexico’s Yucatan Peninsula, causing the Chicxulub crater, and occurred within the time of Deccan flood basalt volcanism in India. The scientists synthesized stratigraphy records across this boundary to assess the proposed causes of the mass extinction. Notably, a single ejecta-rich deposit linked to the Chicxulub impact is globally distributed at the Cretaceous-Palaeogene boundary.

The temporal match between the ejecta layer and the onset of the extinctions and the agreement of ecological patterns in the fossil record with modelled environmental disturbances, such as darkness and cooling of the Earth, lead the conclusion that the Chicxulub impact triggered the mass extinction.

The asteroid would have hit the Earth at a speed of 20 km per second (20 times faster than a speeding bullet), with the energy impact of an atom bomb over a billion times more explosive than those dropped on Hiroshima. The impact would have caused huge fire balls, earthquakes measuring more than 10 in magnitude, and continental landslides that generated giant tsunamis. The Earth atmosphere would have become darker, due to the sulphur emissions, which caused a global winter that lasted for several years, killing off not just the dinosaurs, but many other species that couldn’t adapt to this hostile environment.

I searched Cabdirect for dinosaurs and extinction and found 16 records, including some on dinosaurs' feeding behaviour.