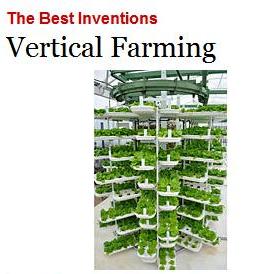 I came across the Time Magazine 50 best inventions of 2009 list this morning and thought it’s worth sharing with the ‘handpicked and carefully sorted’ readers. The list includes number 1 – NASA’s Ares Rockets; number 4 – the smart thermostat; number 8 – the AIDS vaccine; number 22 – the custom puppy; and number 28 – the YouTube Funk, but some of my favourites for their usefulness are: number 16 – the vertical farming; number 20 – the electric microbe; and number 30 – the wooden bone. Read on to see the full list and the video of the five worst inventions of 2009, which includes the gas-masks bra – a bra which doubles as two gas masks.

VertiCrop (number 16) is a hydroponic-farming system that grows plants
in rotating rows, one on top of another, and has already proved to be a
success. The VertiCrop hydroponic vertical farming system was pioneered
by Valcent and was presented at the Dubai forum: "Architecture for Sustainable Societies"
on January 5th 2010. The rotating system gives the plants the precise
amount of light and nutrients they need, while the vertical stacking
enables the use of far less water than conventional farming. Best of
all, by growing upward instead of outward, vertical farming can expand
food supplies without using more land. The rotating hydroponic
technology enables high-density vertical growing, with more plants
being grown in less space and producing crop yields of up to 20 times
higher than conventional farming methods. Tom Bentley, Director,
Business Development for Valcent Products (eu) Ltd said in Dubai: "the
world population is growing, food supply is shrinking, water supplies
are becoming more limited, and food production is competing for land
with housing and the production of fuel crops; we have to make better
use of available land."

The electric microbe (number 20) is Geobacter, a bacterium which has tiny hair-like extensions called pili, which the bacteria use to generate electricity from mud and wastewater. Professor Derek Lovley and his team of researchers at the University of Massachusetts, Amherst, have engineered a strain of Geobacter, which is 8 times as efficient as other strains at producing power. The next step is to create Geobacter-based fuel cells that can generate cheap, clean electricity. Read more. Visit http://cabdirect.org/ for over 700 records on alternative energy.

Wooden bones (number 30) consists of a revolutionary medical procedure, which a group of Italian scientists is working on. They're using wood (red oak, rattan and sipo work best) to create an artificial bone replacement called carbonated hydroxyapatite. Because of the sponginess of the wood, live bones are expected to grow into the structure faster than with traditional titanium or ceramic implants, decreasing the time it takes to mend a broken bone. The procedure isn't quite ready for human testing, so sheep are currently testing the artificial bones. Researchers say that with the bone substitute, which takes approximately one week to process, they can create virtually any size or shape. Read more.

I also recommend that you follow this link to see the video of the five worst inventions of 2009 to find out about the gas-masks bra.