A dramatic approach to Cocoa farming 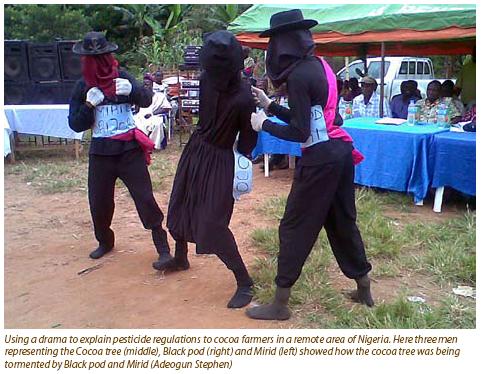 Street/community dramas are often used to try to get a message across to a local audience, but have you ever seen a street drama about pesticide use? Well that’s what they’re doing in Nigeria – a dance/drama approach is being used by the Cocoa Research Institute of Nigeria (CRIN) to educate farmers about which chemicals the Government has either banned or approved for use on cocoa. An article by Adeogun Stephen, CRIN, in the latest issue of GRO-Cocoa, a twice-yearly newsletter on global research on cocoa produced by CABI and funded by USDA for the last 8 years, describes how the initiative has reached farmers in a remote cocoa-growing area of the country.

Europe is the main market for Nigerian cocoa, but the EU changed its regulation on pesticide maximum residue levels (MRLs) in September 2008 in order to safeguard the health of consumers. In order to bring cocoa farming into line in Nigeria the Nigerian Federal Government has reviewed which chemicals are permitted for use on cocoa. This poses new challenges for the mostly rural population of cocoa farmers, leaving very few, and often more expensive, pesticides for use on cocoa. Poor extension services and cocoa farmers’ lack of knowledge about pesticide usage, combined with the illiteracy of most farmers prompted CRIN to embark on a sensitisation programme to educate farmers on chemical control for cocoa production.

On 29 July 2009 CRIN gathered 270 cocoa farmers, officials of the state Ministry of Agriculture, and representatives of farmers’ organisations and processing factories, together with religious leaders and the Chairman of Idanre Council for a day-long meeting in the village square of the remote village of Aseigbo. Farmers were told about how to comply with the EU Regulation, including a message from CRIN Director Farming System Research and Extension, Dr EO Aigbekaen who urged stakeholders to “take the matter with all the seriousness it deserves to avoid the looming doom on the country’s cocoa economy.” The main fear is that, unless stakeholders in the Nigerian cocoa industry make significant steps towards compliance with the EU Regulation, Nigeria’s cocoa may end up being rejected by the EU.

Ibadan-based Glad Tidings Drama Ministry staged a comic drama which “both educated and entertained the gathered cocoa farmers… It focused attention on compliance with the Federal Government’s directive on banned substances and urged the audience to be wary of the economic consequences of non-compliance… The drama also depicted the consequences of using the wrong chemicals on farmers’ health and the environment,” says Ageogun Stephen.

The farmers also used the meeting to put their views and problems to “the men at the centre” during an interactive session. They complained that “many farmers are not aware that some chemicals have been banned, and for those who are aware, the cost of the approved ones is ruinous.” The farmers asked for the Government and other stakeholders in the cocoa chain to help make approved chemicals available at affordable prices. The representative of the Cocoa Association of Nigeria (CAN), Chief Affun Adegbulu, together with the state officials promised to work together to resolve some of these issues raised by the farmers.

To see more photos of the pesticide drama and for further information on limiting maximum residue levels (MRLs), view the full article. 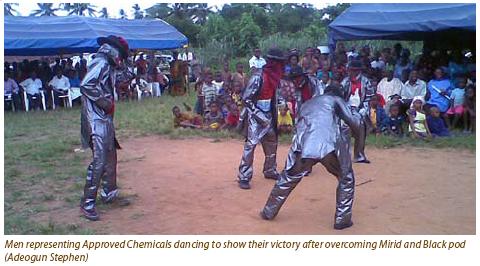 "Global Research On Cocoa – working with and for farmers"
GRO-Cocoa is a twice-yearly cocoa newsletter funded by the US Department of Agriculture for the last 8 years. It aims to provide a forum for information exchange, and a platform for sharing ideas in the belief that fostering cooperation and collaboration will best allow progress to be achieved.
GRO-Cocoa’s primary focus is smallholder farmers, the mainstay of world cocoa production. As such, it particularly welcomes articles on research- and farmer-led research and training that delivers practical IPM solutions to pest and disease problems. It also publishes articles about other initiatives of direct importance to cocoa production.
We welcome contributions, and ideas for articles. Please contact the Editors: Sarah Thomas and Rebecca Murphy at s.thomas@cabi.org; r.murphy@cabi.org.