Flu – can we say goodbye to yearly vaccines soon?

I was at the CDC's session on H1N1 influenza at the American Public Health Association annual meeting in Philadelphia recently and the problems of getting a flu vaccine out to the population fast was brought home to me. It takes about 5-6 months at present to grow and manufacture new flu vaccines and in a pandemic, like the one we have now, a lot of people could die in that time.The main problems are due to antiquated methods of growing viruses, and the need to remake vaccine each year because the virus is constantly changing.

What if one could find a vaccine that didn't need remaking each year and could be used for pandemics caused by new versions of the virus ?

Scientists are working hard on this. On Wednesday last week I had the chance to catch up on the latest research as Ian Wilson of the Scripps Institute, La Jolla, California was over to give a lecture at Oxford University on recent activity in flu vaccine research, focusing on structural studies of the haemagglutinins produced by all flu viruses. 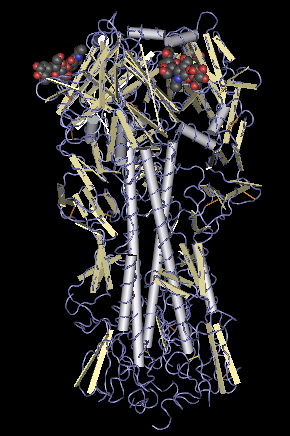 Haemagglutinins are proteins used by the flu virus to bind to the surface of target cells and then enter them. They are a major target for the immune system as antibodies that inactivate them prevent the virus from infecting new cells.

Most of the antibodies that neutralise flu viruses attack the cell binding region of haemagglutinins. This region is highly variable and different virus subtypes have different versions of it. But researchers have been thinking that maybe there is a minority of antibodies that bind to other less variable regions of the haemagglutinin that might be conserved between virus subtypes.

If these antibodies could be found, and the areas on the haemagglutinin they bind to defined, then we might have the basis for developing a vaccine against more than one flu virus type.

The exciting news is that this conserved region on the haemagglutinin has been found.

Professor Wilson described the work of Throsby et al. They isolated antibody producing B cells from patients recently vaccinated against seasonal flu that produced antibodies against the haemagglutinin from the H5N1 version of the virus (bird flu). Theytested the antibodies for their ability to neutralise haemagglutinin activity. These antibodies were then examined to see if they also blocked binding of the haemagglutinin to the cell surface.

Those that could neutralise the haemagglutinin's activity without preventing binding to the cell surface would be of interest because that indicates the antibody is reacting with a part of the haemagglutinin that isn't the variable cell binding region.

An experiment in mice suggested that one of these 13 antibodies provided protection against the current pandemic flu virus as well as the H5N1 'bird flu' virus. It would therefore be a potential therapy for flu. It could also provide the basis for developing vaccines.

The next stage of developing a vaccine is to find some way of improving the immune response to this region of the haemagglutinin so that patients produce more antibodies to it- is now underway.

Keep up to date on flu pandemic: CABI's flu dashboard