The Carbon the World Forgot 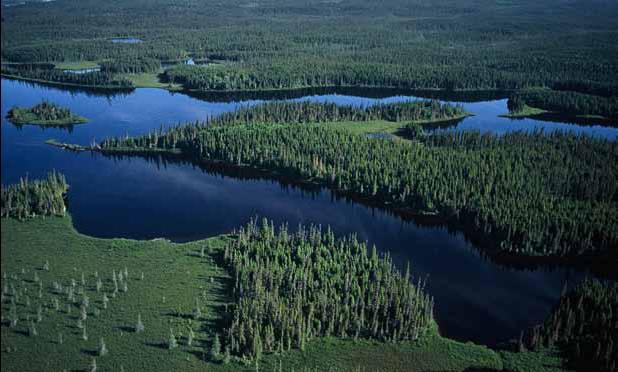 Image courtesy of "The Carbon the World Forgot" report.

Boreal forests, found in northern areas like Canada, Russia, Scandinavia and parts of the United States, cover 11% of the earth and store 22% of all carbon on the land surface in soil, permafrost, peatlands and wetlands. They also store nearly twice as much carbon as tropical forests per hectare: a fact which researchers say should make the conservation of boreal forests as important as tropical in climate change negotiations.

A report published a few weeks ago by the Canadian Boreal Initiative and Boreal Songbird Initiative highlights the importance of these areas and the need to conserve boreal forests and peatlands: "Action is needed to conserve a region that contains 'The carbon the world forgot'."

Researchers explain that while tropical forests store most of their carbon in vegetation, boreal forests store vast amounts of the greenhouse gas deep in permafrost soil and peatlands in addition to its trees. Cold temperatures prevent the complete breakdown of dead biomass in the boreal, so that carbon is accumulated over time, sometimes even millennia. Scientists have found carbon that has been locked away for 8,000 years.

The report complains that the Kyoto Protocol climate pact focused almost exclusively on tropical forests, offered no incentives for forest conservation and excluded peatlands – possible contributing factors to the Canadian government walking away from the Kyoto pact. The first phase of this pact is due to end in 2012 and the United Nations hopes a major climate meeting in Copenhagen in December will lead to a broader framework to expand or replace Kyoto.

Whilst tropical forests are home to the majority of the world’s biodiversity and are lost at a fast rate, making them the focus for conservationists and policy makers, boreal forests must also be included in negotiations if the world is to successfully to mitigate climate change.

Russian Prime Minister Vladimir Putin said earlier this month that climate talks in Copenhagen should take into account the role of the ability of Russia's forests to absorb carbon dioxide when setting climate change targets.

The report points out that any plan to preserve the world’s remaining, carbon-rich old-growth forests would require drastic cuts in industrial emissions and a vast increase in the area designated off limits to the kinds of industrial disturbances likely to release more carbon into the atmosphere.

On the subject of peatlands, the first country-by-country assessment of peat stocks, conducted by Wetlands International and Greifswald University, was also released earlier this month. The report found that drainage of wetlands for agriculture, forestry and peat extraction causes 1.3 billion tons of carbon dioxide emissions per year. Emissions from fires and peat mining (for horticulture and fuel) amount to another 700,000 million tons per year. It also reveals that European Russia is the second largest contributor of peatland emissions (160 million tons CO2) after Indonesia (500 million tons CO2), followed by China (77), USA (67) and Finland (50).

The report notes that peatland emissions are not currently addressed under the Kyoto climate treaty and concludes that reducing peatlands degradation is one of the most cost-effective ways to help mitigate climate change.

For access to more than 1,100 climate change reports from over 150 organisations, go to www.cabi.org/environmentalimpact