Himalayan glaciers – not melting as fast as once thought? 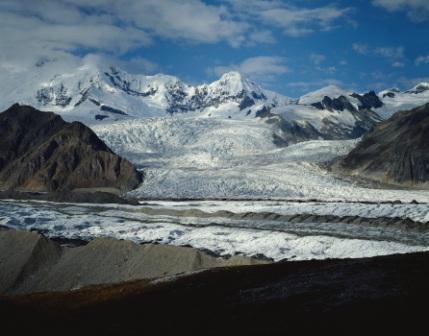 I came across an interesting article whilst reading a recent issue of Science (13 November) that bucks the trend of many gloomy climate change reports over the last few months.

It seems that Himalayan glaciers are not melting as fast as is commonly believed. A recent report by senior glaciologist Vijay Kumar Raina, formerly of the Geological Survey of India, suggests that many Himalayan glaciers show no change or have even advanced, and that the rate of retreat for many others has slowed. Released by the India's Ministry of Environment and Forests a few weeks ago, the report draws on a review of satellite and ground measurements made by Indian research groups presented in a range of published and several unpublished studies.

The area covered by Himalayan glaciers is vast, over 30,000 km2, and records have shown that many began to retreat in the early 20th century with almost a fifth of Indian Himalayan ice coverage lost since 1960. The Raina report agrees with these observations but questions the link with global warming that was presented in the Asian chapter of the IPCC's 2007 Working Group II report. It cites examples such as the 30 km long Gangotri glacier, source of the Ganges, which has shown retreat since 1934 but in the last couple of years the glacier has been "practically at a standstill". Also, no signs of retreat over the last 50 years have been shown by the Siachin glacier in Kashmir. Several Western experts agree with the findings, pointing out that many glaciers in the Karakoram mountains, between India and Pakistan, have stabilized or undergone aggressive advance.

It seems that the picture is more complex than might be supposed. Richard Armstrong, a glaciologist at the National Snow and Ice Data Center in Boulder, Colorado, has pointed out that "glaciers at lower elevation are going to respond faster to a warming climate than those at the highest elevations". In addition, patterns of snowfall are likely more important than temperature with unusually heavy summer snowfall in recent years. Glacial melting may also have been reduced by increased cloudiness during the summer months. The coordinating lead author of the ten author team that wrote the 2007 IPCC report's Asian chapter, Murari Lal (Climate, Energy and Sustainable Analysis Centre, New Delhi), rejects the idea that the IPCC was off the mark regarding the Himalayan glaciers but conceded that the IPCC team relied on unpublished work when assessing the state of the glaciers.

All the scientists agree that more research is clearly needed over the short-term to unravel the complexities of this unique region to gain an understanding of the interplay between climate and glacial formation at high altitudes.

This report reminds me of an article I read a few weeks ago, also in Science (30 October), about a retired civil engineer, Chewang Norphel, who is building artificial glaciers high in the Himalayas to provide meltwater for irrigation during the early summer months for farmers. In the rain-shadow of the Himalayas, the Ladakh region, wedged between Pakistan, Afghanistan and China, receives just 5 cm of rainfall annually, about the same as the Sahara. Entirely dependent on snowmelt and glacial meltwater, the population has been hit by global warming where glaciers have retreated by as much as 10 km and the treeline has risen by more than 150 m in Norphel's lifetime.

Up until now, he has built 10 artificial glaciers which sustain crops that feed more than 10,000 people, often with very little funding and support. His idea was to divert lost meltwater by using stone embankments which also slow the rate of flow allowing it to spread across a large, shaded depression located near a village where it would accumulate and freeze. In spring when the sun rises high enough it slowly melts releasing water for irrigation in time for the sowing season. Local farmers are in no doubt as to the success of the artificial glaciers. Beforehand, Tashi Tandop, a farmer from Stakmo village, struggled to grow barley but since it was built he says "now we can grown many crops, even potatoes, which need to be planted earlier in the spring, but sell for much more money. I get three times more income than I used to".

A major stumbling block is funding – despite using local materials and sustainable techniques, each one costs between 3 and 10 lakh Indian rupees (US$6,000-20,000) depending on size and site. He has had funds granted by a watershed development programme but the money is only being released gradually, $12,000 in two instalments over the last 6 years – not enough to extend the programme to another 75 villages identified as being in suitable locations. Another major problem is climate change, with less and less snowfall during wintertime in this region when it is needed to contribute to the artificial glaciers. However, it is clear that the work of the Glacier Man is making a real difference to the people of this remote region.