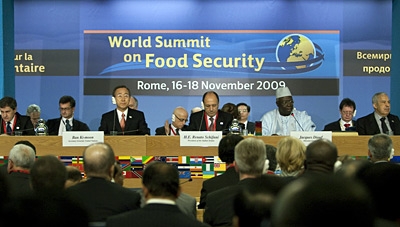 Over one
billion people live in chronic hunger… Every six seconds, a
child dies of hunger. World leaders convened at Food and Agriculture Organisation (FAO) Headquarters for
the World Summit on Food Security today adopted a declaration pledging
renewed commitment to eradicate hunger from the face of the earth
sustainably and at the earliest date. Read on to find out more and please follow the link to sign the FAO petition to eradicate hunger at the end of this blog.

Countries
also agreed to work to reverse the decline in domestic and
international funding for agriculture and promote new investment in the
sector. They agreed to improve governance of global food issues and to
proactively face the challenges of climate change to food security. In
his address to the Summit, UN Secretary-General Ban Ki Moon called the current food crisis "a wake-up
call for tomorrow".

"There can be no food
security without climate security," Ban said. "If the glaciers of the
Himalaya melt, it will affect the livelihoods and survival of 300 million
people in China and up to a
billion people throughout Asia," he said.

"Africa's small farmers, who produce most
of the continent's food and depend mostly on rain, could see harvests drop by
50% by 2020. We must make significant changes to feed ourselves and, most
especially, to safeguard the poorest and most vulnerable."

Addressing FAO's Member
States in all their official languages, the Pope concluded: "God bless
your efforts to ensure that all people are given their daily bread." The
pope called for greater understanding of the needs of the rural world.  "At
the same time," he said, "access to international markets must be
favoured for those products coming from the poorest areas, which today are
often relegated to the margins. In order to achieve these objectives, it is
necessary to separate the rules of international trade from the logic of profit
viewed as an end in itself."

FAO Director-General Jacques Diouf stressed the need to produce food where the
poor and hungry live and to boost agricultural investment in these regions.

"The planet can feed itself, provided that the decisions made are honoured
and the required resources are effectively mobilized," he said, calling
for an increase in official development assistance to agriculture, a greater
share of developing country budgets devoted to agriculture and incentives to
encourage private investment.

"In low-income food-deficit countries, food security programmes and plans
exist and are awaiting political will and financing to become
operational," he noted.

Sign on to the FAO’s
Petition to eradicate world hunger at http://www.1billionhungry.org/, and
encourage your friends and families to do the same. This action will send a
powerful message to world leaders: that it is unacceptable that one billion
people live in chronic hunger, and changing this reality should be our top
priority.

Follow the events as they
unfold at the Hunger Summit, which is being held during this week, 16-18
November:  http://www.fao.org/wsfs/world-summit