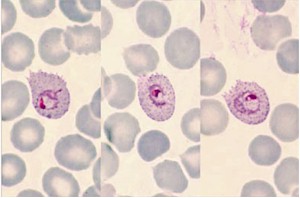 From  Zeno Bisoffi  and Giovanni Swierczynski, of the Centre for Tropical Diseases, S. Cuore Hospital, in Negrar (Verona), Italy.

At the recent ECTMIH 2009 in Verona, Italy, a very well attended parallel session discussed the problem of malaria diagnosis. The keynote lecture by Walter Wernsdorfer had the provocative title: The Use of Rapid Diagnostic Tools – the End of Traditional Microscopic Diagnosis of Malaria?

Not surprisingly, the speaker expressed serious concern about totally abandoning microscopy in favor of the "new" rapid diagnostic tests (RDTs), and fears that microscopy would become obsolete, although no real demonstration exists of the superiority of the new tools.

Members of the audience argued that microscopy quality in Africa (and not only there!) is usually very poor, and that in any case RDTs are the only option where there is no laboratory. They suggested that RDTs should become "standard" in malaria diagnosis, in adults and children.

The subject remains controversial, however. We highlight the main issues that need to be addressed for RDTs below:

1. Recent research has shown that clinicians are reluctant to refrain from treating for malaria after a negative test (1-3). So far, there is no convincing evidence that adequate compliance with the (negative) test result can be uniformly achieved. Of course this is true for microscopy, too.

2. As Wernsdorfer said, RDTs do not allow a quantitative assessment of the parasite density: therefore, in settings where most people are carriers of malaria parasites, the test result will be almost invariably positive, and of no utility in differentiating a simple malaria infection from clinical malaria. Microscopy is not only quantitative, but also detects different stages (such as schizonts and young gametocytes) that are potential markers of severe disease.

3. The safety of an RDT-based approach, especially for young children, has not yet been convincingly demonstrated, though some encouraging indications have recently become available (4).

For these and other "grey areas", the utility (and safety) of a RDT-based approach to malaria management is still under debate, especially for children (5, 6).

As far as microscopy is concerned, it is unfortunately true that its quality in endemic countries (and not only there!) is far from satisfactory, to say the least! There are many reasons for this: lack of training, low quality of staining and sometimes of the microscopes, and no quality control. Is this a sufficient reason to abandon microscopy in favour of RDTs? We are not aware of any study comparing the cost-effectiveness of both methods (including a well organised quality control, which is, not only necessary for microscopy, but also for RDTs!).

Our personal opinion is that "old" microscopy should not be abandoned, and that huge efforts are needed to assure an adequate quality standard. In order to contribute to this purpose, we would like to introduce a comprehensive manual of malaria microscopy (7) (www.atlas-malaria.com), that can be used for teaching purpose and as a reference tool in laboratories.