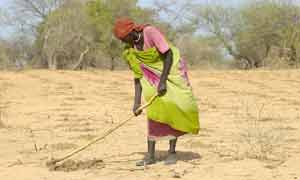 The idea of a World Rural Women's Day to be devoted each year to honour these
rural women, began at a UN Conference for Women in Beijing in September 1995. Because of their
key role in food production and food security, it was decided that the World
Rural Women's Day (also known as the International Day of Rural
Women) fall on the 15 October – the day before the World Food Day.

Past themes have
included: “Rural Women: Leaders of Tomorrow " (2006); "Biodiversity for food
security: women farmers are ready!" (2004); and "Human
Rights for All Rural Women" (1998). This year’s theme is ‘Rural Women at the Heart of
Innovation'. As rural women play an essential role in countering three major
scientific challenges (global climate change, food security and population
growth) the focus for 2009 is on blending traditional knowledge and advances in
human and agricultural sciences by forging links between rural women and
researchers. Without these links agriculture's full potential will not be met
and the empowerment of women to make decisions and become entrepreneurs will be
held back.