An article in yesterday’s New York Times online reported that the Obama administration
announced on Wednesday (30/09/09) that they’re moving forward on new rules to
regulate greenhouse gas emissions from hundreds of power plants and large
industrial facilities, rather than waiting for Congress to act. Read on to find
out how far reaching the new rules will be.

The NY Times article says Obama authorised the Environmental Protection Agency (EPA) to begin moving
toward regulation, which shows the United States’
seriousness in regard to emissions cut, just as negotiators are preparing for
the UN talks in Copenhagen
in December. The Copenhagen Climate Change talks intend to produce an
international agreement to reduce global warming.

The proposed rules, which could take effect from 2011, will
place the greatest burden on 400 power plants, both new plants and those undergoing
substantial renovation, and will require them to prove they have applied the
best available technology to reduce emissions or face penalties. The EPA
administrator, Lisa P. Jackson, said in a conference call with reporters on
Wednesday “We are not going to continue with business as usual; we have the
tools and the technology to move forward today, and we are using them.” She
added that the proposed rule would only apply to the largest facilities, i.e.
those that emit at least 25,000 tons of CO2 per year, which are responsible for
nearly 70% of greenhouse gas emissions in the USA.

Major US
utilities, oil companies and other heavy emitters are obviously worried and are
working closely with Congress to ensure a climate bill would find a way around
EPA regulations, by substituting a market-based cap-and-trade system. Others,
such as the US Chamber of Commerce and the National Association of
Manufacturers, have gone further and, in a true US style, even threatened to sue
the EPA, if they try to impose controls on emissions.

Yesterday, as I was reading a report
‘Information toolkit for post-2012 climate policies’ to add to the CABI
internet resource, Environmental Impact,
I came across ‘Vattenfall’s global climate abatement map’,
which contains some interesting interactive facts and figures that show, in
diagram form, which regions of the world and which sectors are emitting the
most CO2 and their abatement potential. I have linked the map here, if you want to have a browse, but I can
say from it that, globally, power plants emit the most CO2 (24%), followed by
industry (23%) and the sector emitting the least CO2 (8%) is buildings. No
wonder Obama and the EPA want to start off with rules to reduce emissions from
power plants! 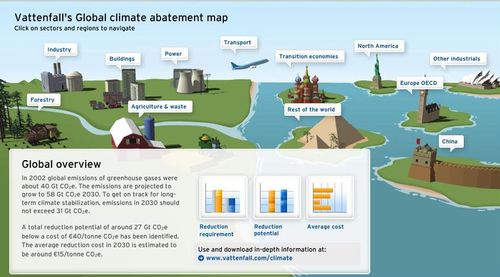