A website endorsed
by U.N. Secretary-General Ban Ki-moon, PlanetCall.org, aims to collect 1
million signatures from youth in the final 100 days to COP15. Read on to find
out how.

When there were just 100 days to go until
the critical U.N. Climate Change Conference in Copenhagen (COP15), a Web
campaign was launched at the end of August, with the aim of uniting 1 million global
youth on a declaration that calls for a bold new climate treaty to safeguard
the future of our planet.

In addition to signing the declaration, which will be handed over to the host
of COP15, the Danish Government in December, the website http://www.planetcall.org/,
which is endorsed by U.N. Secretary-General Ban Ki-moon and Danish Minister for
Climate and Energy Connie Hedegaard, also asks young people to make their
"Call" for the solutions they feel should be supported by a necessary
successor to the Kyoto Protocol.

Erik Rasmussen, founder of the Copenhagen Climate Council and CEO and
Editor-in-Chief of Monday Morning, who is cited by the World Economic Forum as
one of the 100 most influential journalists globally, said: "We owe it to
young people that they have their say. It is their future, their quality of
life, which is at stake. If the treaty in Copenhagen
shall claim a lasting sustainability it has to include ideas and reflections
from global youth. The ambition with PlanetCall is to offer a shared platform
for young people and youth organizations all over to world to ensure they have
maximum influence on their own future." 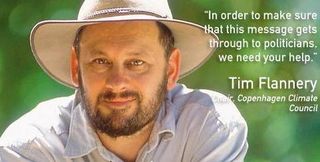 Famous names such as Tim Flannery, and green innovator Shai Agassi, among
others have also posted a "Call" or feature in videos on the site, to
inspire youth. Further calls to youth in video and text form from celebrities
and others will also be revealed week by week, counting down to COP15.

The site also showcases the best solutions videos and encourages youth
organizations all over the world to sign up and share their work and ideas,
uniting for climate and forging the biggest ever youth coalition to present a
climate declaration to decision-makers on climate.

Other organisations aimed at youths who want to register their support, before
the Copenhagen
meeting takes place, include Unite for Climate and Vote Earth, which can be
accessed here