Things are looking up for the future of the Amazon. A number of positive news stories have appeared in the last month including decreased deforestation rates, regeneration of previously deforested land, new land reform legislation and progress with action on cattle ranching. Here’s a summary – follow the links for more information and sources.

Falling deforestation rates
Deforestation in the Brazilian Amazon is likely to fall between 8,500 km2 and 9,000 km2 for the 12 months ended 31 July 2009, a reduction of 29-37% from last year, despite July's jump in logging, reports Brazil's Environment Minister Carlos Minc. 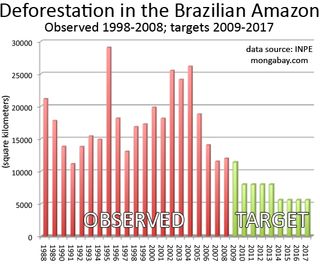 Minc’s estimates are based on a preliminary report by Brazil's National Institute of Space Studies (INPE) which showed a 46% reduction in deforestation in the Brazilian Amazon for the year ended in July. Although Minc would have us believe that 90% of this reduction is due to increased enforcement effort, experts say falling commodity prices resulting from the global economic crisis was also a factor – deforestation has in the past increased when demand for soya beans, beef and timber have gone up.

20% deforested land regenerating
In another finding from INPE, 20% of land deforested in the Brazilian Amazon is now regrowing forest. Analyzing high resolution satellite imagery, analysts at INPE found large areas of regenerating forest in Pará, Mato Grosso, and Amapá states which account for the majority of Brazil's deforestation.

The new monitoring system will allow INPE to determine the fate of deforested lands, enabling Brazil to track carbon fluxes from deforestation, degradation, and regrowth. The accounting system is needed for Brazil to reach its target of reducing emissions from deforestation 70% from a 1996-2005 baseline by 2018.

Land reforms
Significant progress was made towards protecting the Amazon forest when President Luiz Inácio Lula da Silva signed a bill considered by many to be Brazil’s most important environmental effort in years while vetoing several of its most controversial measures.

Provisory Measure 458 will privatize an area about the size of France currently occupied illegally in the Brazilian Amazon. Under the new bill, those unlawfully occupying lands of up to 1,500 hectares could receive legal title to such property if they meet certain conditions, including having peacefully obtained the land and keeping it in productive use.

Since the law took effect over 2 months ago, more than 4,000 farmers have been registered and the aim is to reach nearly 300,000 farmers in three years. Lula’s vetoes prevent the transfer of public lands in the area to businesses and other legal entities, and prohibit the granting of titles to absentee landholders.

Supporters of the legislation argue that the bill will decrease deforestation because legally owned, titled land will be better managed than commonly owned areas, and because all private landholders must comply with another Brazilian law requiring them to maintain 80% of their land forested. Critics say that decades of irregular occupation have created "land chaos" in the Amazon. There are also fears that the situation of illegal occupation may worsen due to the new law.

"People will come to the region to occupy public land trusting that in the future there will be another amnesty that will legalise everything," says Paulo Barreto, a senior researcher for the Amazon Institute for Mankind and the Environment (IMAZON). 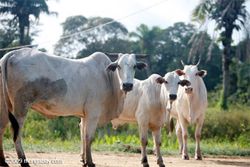 Cattle ranching is widely accepted as a dominant driver of deforestation in the Amazon. In June this year Greenpeace issued Slaughtering the Amazon, a report that linked some of the world's most prominent brands to illegal destruction of the Amazon rainforest. The fallout was immediate and substantial. Amongst other things, days after the report was released, Brazil's biggest domestic beef buyers, supermarket chains Wal-Mart, Carrefour, and Pão de Açúcar, announced they would suspend contracts with suppliers found to be involved in Amazon deforestation.

In an interview earlier this month Roberto Smeraldi, founder and director of Amigos da Terra, said that the path forward for cattle ranching in the Amazon is “A technological revolution in terms of productivity, associated with a drastic reduction in spatial footprint or extensiveness of ranching, a moratorium on expansion of processing capacity and restoration of forests in the area to be abandoned. The latter can help finance the earlier, through carbon credits in the existing market.”