Trees on farms – area twice the size of the Amazon 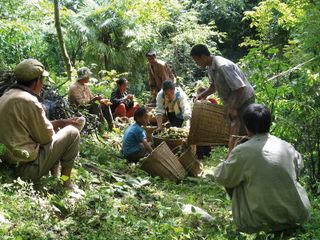 Almost half of the world's farmland has at least 10% tree cover, according to scientists from the World Agroforestry Centre, indicating that farmers, particularly in the developing world, are far less destructive to carbon-storing forests than previously believed. This is the first study to use detailed satellite imagery to quantify the extent to which trees are a vital part of agricultural production in all regions of the world. 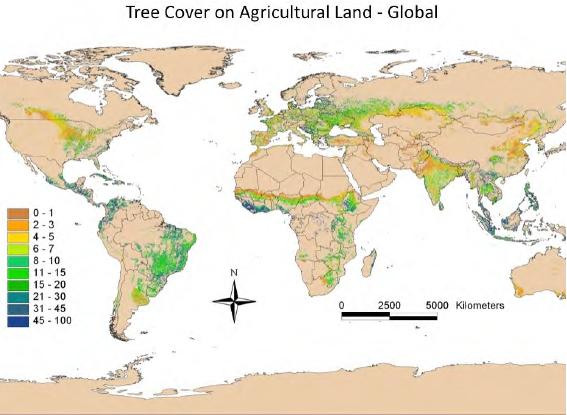 “The area revealed in this study is twice the size of the Amazon, and shows that farmers are protecting and planting trees spontaneously,” said Dennis Garrity, the Centre’s Director General. “The problem is that policymakers and planners have been slow to recognize this phenomenon and take advantage of the beneficial effect of planting trees on farms. Trees are providing farmers with everything from carbon sequestration, to nuts and fruits, to windbreaks and erosion control, to fuel for heating and timber for housing. Unless such practices are brought to scale in farming communities worldwide, we will not benefit from the full value trees can bring to livelihoods and landscapes.”

“If planted systematically on farms, trees could improve the resiliency of farmers by providing them with food and income,” said Tony Simons, Deputy Director General at the World Agroforestry Centre. “For example, when crops and livestock fail, trees often withstand drought conditions and allow people to hold over until the next season… What trees essentially provide to farmers is choice.”

Previous estimates for the amount of farmland devoted to agroforestry have ranged from as low as 50,000 hectares to as high as 307 million hectares. But these estimates were not derived from detailed remote sensing data as was employed in this assessment. In this study, scientists were able to measure the amount of tree cover on each square kilometer of the world’s 22.2 million square kilometers of farmland.

“This study offers convincing evidence that farms and forests are in no way mutually exclusive, but that trees are in fact critical to agricultural production everywhere,” said Professor Wangari Maathai, founder of the Green Belt Movement.

According to experts at the World Agroforestry Centre, farmers, particularly in developing countries, would adopt various agroforestry practices more rapidly if they got credits under a new U.N. climate pact due to be agreed at a meeting in Copenhagen in December. 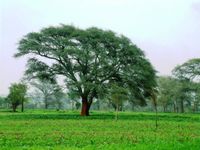 A specific example of a tree that has been found to be particularly valuable to agriculture is Faidherbia albida (Mgunga in Swahili) (shown on the right). With its nitrogen-fixing qualities, this tall, long-lived acacia tree could limit the use of fertilizers; provide fodder for livestock, wood for construction and fuel wood, and medicine through its bark, as well as windbreaks and erosion control to farmers across sub-Saharan Africa. The tree is adapted to an incredibly wide array of climates and soils from the deserts to the humid tropics.

The Faidherbia acacia tree has the quality of "reverse leaf phenology," which drives the tree to go dormant and shed its nitrogen-rich leaves during the early rainy season – when seeds are being planted and need the nitrogen – and then to re-grow its leaves when the dry season begins and crops are dormant. This makes it highly compatible with food crops because it does not compete with them for light-only the bare branches of the tree's canopy spread overhead while crops grow to maturity. Their leaves and pods provide a crucial source of fodder in the dry season for livestock when other plants have dried up.

Currently, the Departments of Agriculture in both Malawi and Zambia are seeking to double maize production with the use of the tree. They recommend that farmers establish 100 Faidherbia trees on each hectare of maize that is planted.

To find out more about agroforestry and the importance of trees for agriculture, including over 450 abstracts on Faidherbia albida, subscribe to Agroforestry Abstracts or Forest Science Database.