Current science on Arctic warming and its global effects 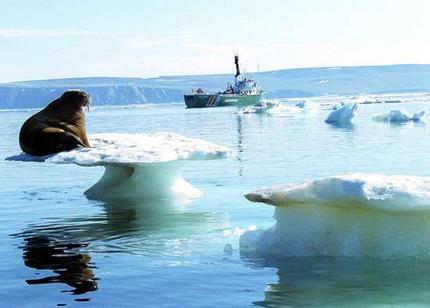 Over the past few decades,
the Arctic has warmed at about twice the rate
of the rest of the globe. This has resulted in destabilisation of important Arctic systems, including sea ice, the Greenland Ice Sheet, mountain glaciers
and aspects of the Arctic carbon cycle. A peer-reviewed report dealing with the
subject was produced by WWF and brings together top climate scientists who
assessed the current science on Arctic warming and its global effects. Read on to find out more.

The report Arctic Climate Feedbacks:
Global Implications was presented on 2 September 2009 at the World
Meteorological Organization’s ‘World Climate Conference 3' in Geneva. It states that continued Arctic
warming could lead to global weather changes, flooding, which could affect one
quarter of the world’s people, and sudden increases in greenhouse gases
emissions from massive Arctic carbon pools.

What potential regional
impacts does the report predict?

The report emphasises that
changes in the Arctic are likely to affect everyone wherever we live,
but it does not often single out specific impacts on specific countries, as
that sort of fine-tuning of impacts requires further scientific investigation.
There are some country or regional-specific impacts in the report, as outlined
below:

(NB – these should all be
phrased as potential impacts)

The CABI internet resource Environment Impact provides many reports, articles and reviews on effects of global warming on the climate and on biological systems.