We caught malignant malaria from chimpanzees — but when exactly? 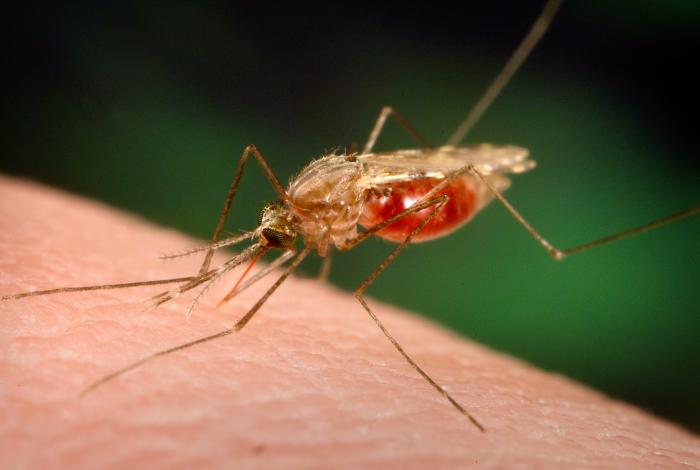 A couple of weeks ago I came across a news item entitled 'Scientists
report original source of malaria', with a sub-headline to the effect that
it jumped to humans from chimpanzees, possibly through a single mosquito.
Reading the story indicated that it actually referred just to Plasmodium
falciparum malaria, although this is the most important form as it causes
the most serious disease and the great majority of human malaria deaths
(remember that malaria
in the wider sense affects a wide variety of animals and dates back millions of
years).

The article to which the news item refers, by S.M. Rich et al. was published in the Proceedings
of the National Academy of Sciences on 3rd August (ahead of its appearance
in print) and can be found here.
It had been suggested previously that the high virulence of P. falciparum
indicated that it had transferred to humans comparatively recently. Earlier
molecular genetic studies had indicated that its closest relative was P.
reichenowi, isolated from a chimpanzee, but did not indicate whether the two
species had separated at the same time as the ancestors of humans and
chimpanzees or whether there had been a transfer from one host to the other (and
if so in which direction) at a more recent date. Further studies demonstrated, it is claimed, that P.
falciparum had very low levels of neutral genetic polymorphism (i.e.
polymorphism that has no effect on the proteins produced from genes), and this
was interpreted as meaning that the species had expanded worldwide comparatively
recently.

Previously there was only one available isolate of P. reichenowi, so
it was not possible to compare its genetic polymorphism with that of P.
falciparum. The recently published study collected eight more isolates from
chimpanzees in West Africa, and investigated three genes, namely mitochondrial cytB,
apicoplast clpC and nuclear 18S rRNA, in these isolates and in 133
P. falciparum isolates. The nine strains of P. reichenowi showed
much greater polymorphism than the 133 of P. falciparum, supporting the
idea that the latter species has diversified more recently, and when the data
were used to generate a phylogenetic tree, the P. falciparum strains formed
a single branch of closely related strains, suggesting that they were descended
from P. reichenowi by just one
transfer from chimpanzees to humans.

It has been suggested that the development of agriculture within the last 10
000 years or so led, by  means of the resulting changes in mosquito
habitats, to the transfer of P. reichenowi to humans, and the estimated
age of mutations that increase human resistance to malaria infection is
consistent with this. On the other hand it is possible that the host transfer
occurred long before the recent diversification of P. falciparum — lack
of suitable binding proteins for the invasion of human red blood cells might
have kept the parasite scarce in humans until it evolved such proteins.

My view of this nice neat story was altered somewhat when I did a search on CAB
Abstracts and came across several articles, mostly not cited in the PNAS
article, arguing that P. falciparum does in fact have a high degree of
genetic polymorphism, at least on some chromosomes, and must therefore be of
more ancient origin. A proper investigation of this is beyond the scope of a
simple blog entry,  but a chapter1 in the
book Molecular approaches to malaria discusses the question briefly. It is suggested there
that its genome may be of mosaic origin, with some regions sharing a common
ancestor more recently than others. The mitochondrial genome, being
uniparentally inherited without recombination, ought to be free of such
complications, but a study2 quoted in the book suggests that while most of a
sample of 100 isolates from around the world appeared to have diverged from a
common ancestral sequence about 10 000 years ago, a few were much older; it is
suggested that there were two separate waves of migration of P. falciparum
out of Africa.

This doesn't contradict the new study, whose key finding is the descent of P.
falciparum from P. reichenowi; indeed Rich et al. cite the article
just mentioned (albeit to illustrate a different point), and they say that the
host transfer could have happened 2-3 million years ago. It does however
illustrate the usefulness of looking behind the headlines and the statements in
the first article that you come across — things are often more complicated than
they appear at first.