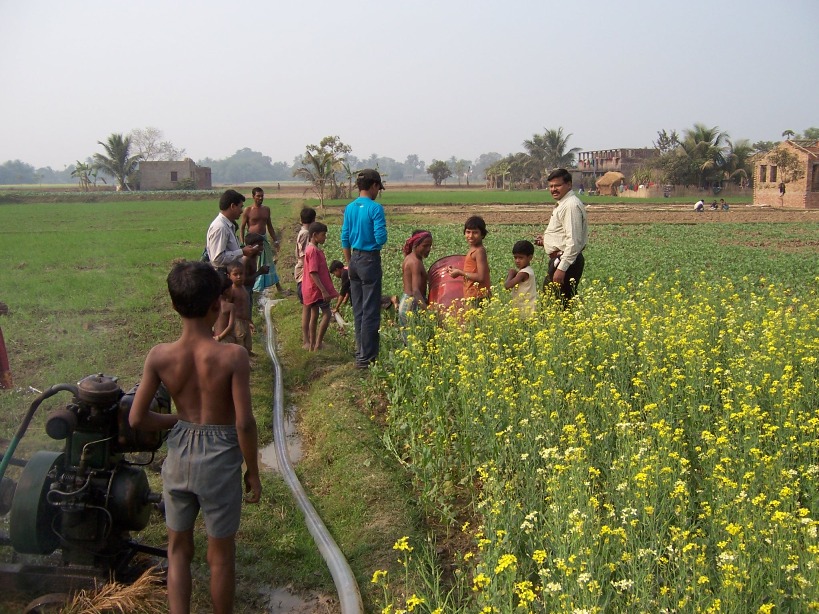 Last night, I watched a new BBC documentary on the challenges to food production in a world of changing climate and increasing population. The programme featured growing water shortages in parts of India (where drought has hit again this year), and how Western countries importing food from India were also importing 'virtual water' and potentially exporting hunger.

The vital role of water to food production in Asia is highlighted in a report released this week at 2009 World Water Week in Stockholm by the International Water Management Institute (IWMI). The report says that without major reforms and innovations in the way water is used for agriculture, many developing nations face the politically risky, and economically difficult, prospect of having to import more than a quarter of the rice, wheat and maize they will need by 2050.

The report says that 94% of suitable land in South Asia is already being used for growing food, making it impossible to meet future demand for food production by converting more land to agriculture. This leaves only two other options for feeding growing populations: import large quantities of cereals from other regions, or reform how water is used and focus on irrigated farmlands.

The population of Asia is forecast to expand by one and a half billion people over the next 40 years. Combined with changing diets as much of the population becomes more affluent, this brings huge demands on food production.

"Asia's food and feed demand is expected to double by 2050" says Colin Chartres, director general of IWMI. "Relying on trade to meet a large part of this demand will impose a huge and politically untenable burden on the economies of many developing countries. The best bet for Asia lies in revitalizing its vast irrigation systems, which account for 70 percent of the world's total irrigated land."

From 1970 to 1995, the area under irrigation in Asia more than doubled, according to the IWMI-FAO report, making this the world's most intensively irrigated continent. But with both water and land in short supply, increasing food production means gains in water productivity.

The key element of the strategy set out in the report is to modernize the region's large-scale irrigation systems, which were built to rely on surface water. Constructed throughout much of Asia in the 1970s and 1980s, these systems are currently in poor condition. Another suggestion is for governments to help individual farmers use cheap pumps to extract ground water for irrigation.

The scenarios presented in the IWMI-FAO report do not factor in climate change, which could make rainfall more erratic and increase the strain on already overstretched irrigation systems. As a result, even the study's pessimistic assumptions may prove overly optimistic, according to modeling experts.

The report, 'Revitalizing Asia's Irrigation to Sustainably meet tomorrow's needs' can be downloaded from the IWMI's World Water Week website. Food security, increasingly in the news at the moment, is the focus of CABI's 'Global Summit' to be held in London in October. The summit includes a session on the impact of climate change on food security.