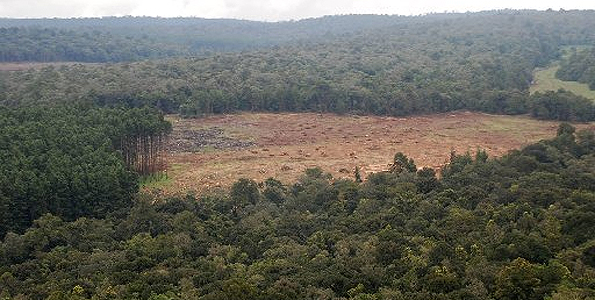 East Africa's wildebeest migration, which crosses the River Mara and brings vast herds of animals into the Maasai Mara game reserve, is one of the great wildlife spectacles of the world. But the migration, and other iconic wildlife attractions including the millions of flamingos that Lake Nakuru in Kenya is famous for, are under threat from the drying up of many of Kenya's rivers. Destruction of the Mau Forest Complex is being blamed, and moves to protect the forest have been hitting the headlines in East Africa over recent weeks.

The Mau Forest Complex, a 400,000 ha montane forest, is the largest forest in Kenya. It also forms the upper catchments of all except one of the main rivers in Kenya east of the Rift Valley, including the Mara River and the three rivers (Njoro, Makalia and Nderit) which feed Lake Nakuru. River Molo, which also has its source in the Mau, no longer finds its way to Lake Baringo, another tourist destination. Lake Natron, fed by River Ewaso Ng'iro, is the breeding ground for flamingoes that are the main attraction at Lake Nakuru.

Low water levels in the River Mara meant that the wildebeest migration was less dramatic this year, while the Kenya Wildlife Service (KWS) is having to spend Sh250,000 a month to provide water for wildlife in the Lake Nakuru National Park. This is the second most visited destination in Kenya, and brings Sh5 billion revenue from tourism according to 2007 estimates.

Kenya Wildlife Service assistant director in charge of Central Rift conservation area, Ms Anne Kahihia, said recently that Lake Nakuru might be extinct in five years. She warned of a looming disaster if destruction of the Mau Forest Complex and other catchment areas was not stopped.

But it isn't just tourism under threat. Energy projects and irrigation water are also under threat from the forest destruction – and so are the livelihoods of millions of people. A UNEP report says the Mau is a major micro-regulator for crops, particularly tea, which is a major foreign exchange earner. It puts revenue collected from tea at Sh8 billion a year (2007 estimates.) Tea growing areas are located near montane forests where conditions for optimum tea production are met.

"Power generation will be greatly hit as Kenya heavily depends on hydropower from the Mau and the Mount Kenya," says Mr Henry Ndede, a programme officer at the United Nations Environment programme (Unep) regional office for Africa, quoted in the Kenyan press last week.

The Mau Forest has dwindled rapidly in recent years, as detailed in the report ""Mau Complex under Siege: Values and Threats", published in May last year. In 2001, the government excised more than 67,000 hectares of forest land reserve, mainly in the Mau Complex. The largest excision affected Eastern Mau Complex and Southwest Mau Reserve where 35,301 ha and 22,797 ha respectively were excised. This represents 54.3 per cent of these forests.

There were also the earlier Maasai Mau excisions. "The boundaries of the Maasai Mau Forest (46,278 hectares) were agreed upon in 1987, based on the work of the Ntutu Commission," the report notes.

Since the delineation, however, large tracts of forests were clear-felled outside the boundaries. More recently, encroachments have taken place inside the forest boundaries. The 'Nowater-nolife.org' website says that the post-election 2008 upheavals, many whose lives were disrupted fled to the Mau Forest for access to sources of charcoal or farmland. Aerial surveys in January show that the western side of these headlands has become heavily settled.

The Kenyan government has now announced that thousands of people will be evicted from the Mau Forest Complex. A government report which details the loss of 25% of the forest over the last 16 years claims that a program granting a small forest-dwelling tribe legal rights to live there, had been manipulated to give ownership of large tracts to politically connected individuals. The report says at least 45,000 people now live in the forest and should be moved out to allow it to re-grow.

The government will resettle over 2,500 households on 71,659 acres of publicly owned forest, Prime Minister Raila Odinga announced on 31 July, reported by Associated Press. An average household in Kenya is estimated to have five people, putting the number to be evicted at more than 12,500.

The government will also replant trees in the Mau and form a force of police and wildlife and forest rangers to protect the forest, asking donors to help defray the total cost of 37 billion shillings ($483 million).

The task force that produced the report on the forest recommended all people living there should be evicted.

"Failure to do so will lead to untold suffering by the people of Kenya and the neighboring countries, for which history will judge the present generation harshly," it said.

Only those who legally settled in the forest should be compensated or be resettled elsewhere, the report recommended. It does not say how many people legally settled.

While the move is opposed by some of the tribal groups within Kenya's government, it is largely supported by the Kenyan media, and seen as essential to safeguard the livelihoods of millions across East Africa. With a quarter of the forest already lost, the need for action is urgent.

"Something needs to be done immediately. People need to get out. The question of resettlement can actually be handled much later," says Charles Peter Mwangi, a Mau Forest specialist for the Kenyan environmental group Green Belt Movement. "But we need first of all to tell people to get out, outside the forest. Now they can negotiate with the government whether they will be compensated or not, but first of all they need to be outside the forest so we can start rehabilitation work."