Whilst leafing through a recent issue of Science magazine I was interested to read a news item that highlighted ExxonMobil's entry into the biofuels arena. ExxonMobil, the last major oil company to move into biofuels, has announced that it intends to spend $600 million over 5-6 years to develop biofuels from algae. Half the money from this major investment will fund work by Synthetic Genomics Inc. (SGI), the California-based start-up run by genomic sequencing pioneer J. Craig Venter also known for his work in developing synthetic organisms. The other half of the money will be spent in-house concentrating on scaling up production and refining.
"Meeting the world’s growing energy demands will require a multitude of technologies and energy sources. We believe that biofuel produced by algae could be a meaningful part of the solution in the future if our efforts result in an economically viable, low net carbon emission transportation fuel” said Dr. Emil Jacobs, vice president of research and development at the ExxonMobil Research and Engineering Company. 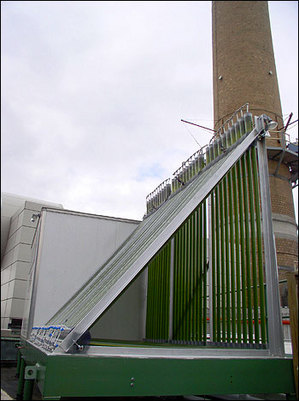 SGI has already produced reengineered algal strains that secrete hydrocarbons which allows them to be produced continuously in bioreactors. This is a major advantage over traditional approaches which relies on farming algae then harvesting and extracting oils that are further refined into usable biofuels.

“The real challenge to creating a viable next generation biofuel is the ability to produce it in large volumes which will require significant advances in both science and engineering,” said Venter, CEO of SGI. "The alliance between SGI and ExxonMobil will bring together the complementary capabilities and expertise of both companies to develop innovative solutions that could lead to the large scale production of biofuel from algae.”

We have run several articles over the last few months considering algal biofuels and have highlighted these problems in scaling up production. Stephen Mayfield, a cell biologist based at the Scripps Research Institute in San Diego thinks that this is the major hurdle but he agreed with Venter stating "that's a key component Exxon will bring to this deal."

Algae present major advantages over other biofuel sources such as rape or sugarcane as they do not require agricultural land, absorb carbon dioxide and have the potential to produce far more biofuel per kg biomass than other biofuel crops.

This potential has been recognised by the venture capital market with two algal biofuel companies, Sapphire Energy (San Diego) and Solazyme (San Francisco), raising $100 million and $76 million, respectively. An $850 million project was announced recently by Florida-based Algenol Biofuels to produce ethanol from algae.

So when will algae-based biofuels be on the market? The answer it appears is shortly when Algenol plans to sell fuel later this year from its production facility in Mexico. Other companies expect to algal biofuel to start flowing from pumps in 2012 (Aurora Biofuels in California) and 2013 (LS9 also based in California).

Those wishing to save a few bob at the petrol pumps might like to try all this at home by downloading a 650 page book for just $99.99. However, it is pointed out that this is not a simple afternoon venture but a "serious, long-term commitment"!