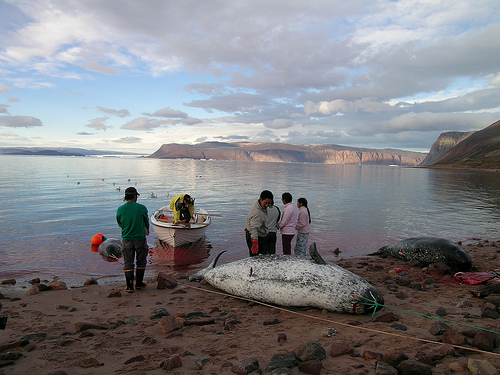 Climate change is still a hot issue with talk of negotiations and reductions of emissions in greenhouse gases in advance of the Copenhagen summit in December. But how is climate change affecting us in our daily lives? Here in the UK, I would be hard pushed to see the effects of climate change unless you count a news report I saw yesterday that stated that English apples are already in the shops some weeks early.

However, communities living in the northern polar regions have been seeing the effects of climate change all around them, and it has been affecting their daily lives for the last 20 years. Some 160,000 Inuit live in northern Canada, Greenland, Alaska and Chukotka, Russia and until a few years ago they used eight different seasons to describe the variations in the climate. Today they need only four.

Some of these changes resulting from global warming include increased snowfall, longer sea ice-free seasons, emerging or invasive species of birds, fish and insects (barn owls, mallard, pin-tailed ducks and salmon), declining lemming populations and general warming trends which have been affecting the permafrost causing beach slumping and lake erosion. Recent work has shown that reductions in lemming numbers, which are an important prey species for the Arctic fox) are due to decreased snow cover. Lemmings forage in the space between the snowpack and the soil surface, and without the snow they are exposed to predators which has led to a significant reduction in populations.

Patricia Cochrane is a Inupiat native of Nome, Alaska and she revealed that Inuit people in the region are reverting to traditional dogsleds instead of snow machines.

"People go out on their snow machines, fall through the ice and are never seen again," she said. "But our sled dogs will tell you when the ice is not safe…and they're a lot easier to feed than (to pay) the gas prices that we have, $10 a gallon in many of our villages."

Thawing permafrost is causing major problems with roads and stilt houses prone to collapse. The Alaskan village of Newtok is the first casualty of climate change and intensified river flows and melting permafrost are forcing the 320 residents to relocate to higher ground 9 miles away. According to the US Army Corps of Engineers, around 26 other Alaskan villages are in immediate danger with 60 others under threat in the next decade.

The Inuit have adjusted to social, cultural and economic changes over the last 40-50 years with the exploitation of their lands for oil and gas. It remains to be seen whether the Inuit can continue to constantly adapt to this rapidly changing environment, and keep their culture and traditions intact.

CABI's newest internet resource Environmental Impact has a wide range of information on climate change and other environmental impacts not just in the polar regions but globally.