How large is your country’s footprint? – The Carbon Footprint of Nations 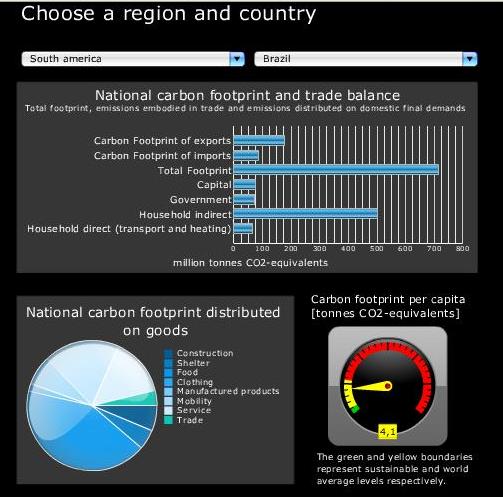 A new study on greenhouse gas emissions associated with a nation’s consumption shows that high wealth seems to always result in high emission of carbon dioxide (CO2) and other greenhouse gases. In a paper entitled ‘Carbon footprint of nations: a global trade-linked analysis’, Edgar Hertwich and Glen Peters investigated the carbon footprint for food, shelter, clothing, construction, mobility, the consumption of manufactured goods, services, and trade for 73 nations and 14 aggregate regions. The paper was published online in June 2009 in Environmental Science & Technology, the environmental science journal published by the American Chemical Society. Read on to find out how large economies, such as the USA, Japan, the UK and the poorest African nations perform.

There is a strong dependence of CO2 emissions on wealth. The CO2 emissions from fossil fuel burning and industrial processes increase by 81% with a doubling of per-capita expenditure. The emissions of other greenhouse gases, primarily methane and nitrous oxides, increases less strongly with wealth, by only 32%, because they are mostly associated with food production.

The analysis shows that the highest carbon footprint occurs in rich countries in North America (the U.S.A and Canada), Europe (Switzerland, Finland, the Netherlands), and Asia-Pacific (Australia), whereas the lowest occurs in African countries.

Food production is the most important cause of greenhouse gas emissions in poor countries, followed by household energy use, which is mostly for food preparation, hot water and heating.

Only very few, poor countries such as Bangladesh, Malawi and Mozambique have carbon footprints near the 1 ton per person required for all nations by 2050 in order to limit global warming to 2 oC. For most countries, the carbon footprint of food alone is around 1 ton per capita. I think it’s clear we can only achieve the 1 ton per capita if we really go back to basics and start living like people in Bangladesh and Malawi do. What are the chances of that happening???

The Environment Impact subset of the CAB Abstracts database
contains close to 200 other records on carbon footprint.