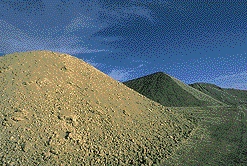 As I screened a journal
called Elements for the CAB Abstracts
database the other day, I came across an interesting article entitled
‘Bentonite, bandaids and borborygmi’ (1), which is all about  the practice of eating clay for
gastrointestinal ailments and applying clay topically as a dressing or bandaids
for skin infections. Apparently it is a practice as old as mankind and has been
observed in cultures worldwide (2). Could the vast surface area and
chemical/physical properties of bentonites provide a natural pharmacy of
antibacterial agents? Read on to find out!

The deliberate consumption
of soil for medicinal or spiritual healing – Geophagy – is a practice that
provides a direct connection between human health and Earth’s rocks and
minerals. Intermediates in the food chain are eliminated, thus providing direct
access to potentially beneficial or harmful elements and compounds associated
with the ingested materials. The article by Williams et al. showed that the healing practices of ancient cultures, as
well as of modern society, have depended on clay minerals to treat a variety of
topical and internal ailments. High cation exchange capacity and extremely fine
particle size explain why these minerals are used topically as bandaids to
absorb secretions, toxins and contaminants.

Clays are believed to
cleanse and refresh the skin and aid in the healing of blemishes; hence, the natural
clays with adsorptive and absorptive properties have been exploited in
cosmetics and pharmaceuticals. This is based on a simple clay property, i.e.
the attractive power of clay-particle surfaces; negatively charged surfaces
attract positively charged substances and, like a sponge, clay minerals absorb
substances between the layers of their crystal structure. Cation exchange can
take up or release toxins or nutrients such as calcium and iron that may be
used by bacteria and therefore starve them.

Haydel et al. (3) documented distinct antibacterial properties of iron-rich
clays for healing severe skin infections. French green clays, sold as ‘healing
clays’ were used to treat a necrotic mycobacterial skin infection called Buruli
ulcer. This motivated testing of bentonites from around the world and resulted
in the identification of several clays with bactericidal effects on a broad
spectrum of human pathogens. The clay penetrates the bacterial cells and either
tear them when the clay expands or poisons them. However, Williams et al. 2008 (4) pointed out that while a
bactericide that works by physical processes is desirable for applications
where contact between a cell and clay is possible, for example air filters,
sewage systems, cell lysis (tear) resulting from physical contact with natural
or modified clays makes its use on human tissue potentially harmful.

Although the use of clay on
the skin as an antibacterial cleanser seems promising and is an acceptable
practice, it’s ingestion is not recommended because the consequences for human
health can be risky, with the most severe risk of eating clay being a total
blockage of the lower intestine, which can only be remedied by surgery (5).
Eating clay can also result in nutrient deficiencies. Other complications are
detrimental effects on the teeth and gums and the digestive system, nutrient
excesses, poisoning, and parasitic invasions. Reports on health effects of
Geophagy are conflicting. For example, consumption of some clays causes high
levels of potassium in the blood, while others promotes low potassium.

A search on Geophagy
in the CAB Abstracts database resulted 97 other abstracts on the subject and not only on the practice by humans
but also various animals. I also came across another recent article in Environmental Geochemistry and Health on
Geophagy practice by Asian elephants, which found that elephants ate soils
mainly not to supplement the mineral contents of their forage but to detoxify
unpalatable compounds in their diet.