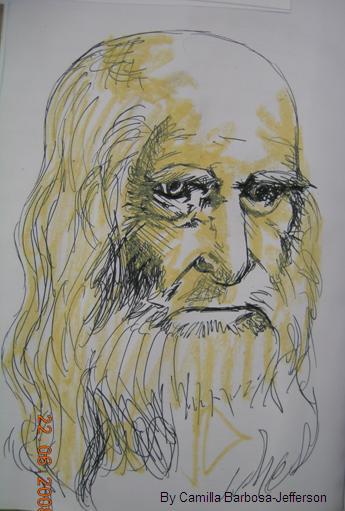 Whilst screening a pile of publications, I recently came
across a new book entitled Leonardo Da
Vinci’s Water Theory: on the origin and fate of water. As Da Vinci himself,
the book is fascinating, revealing and inspiring. Leonardo Da Vinci’s water
theory opens up a new history to the study of water. Over 200 years before Newton, Perrault and
Halley, Da Vinci was doing hypothesis-driven science and describing and
classifying hydrological processes. For example, he came close to the modern
definition of the hydrological cycle, recognising that water passes through the
major river systems countless times, summing up to volumes much greater than
those contained in the world’s oceans. I’m sure not many people are aware of
his astounding contribution to hydrological science, so I thought I’d blog
about it. Read on to see more highlights of the book.

The book is by L. Pfister, H. Savenije and F. Fenicia and
published by the International Association of Hydrological Sciences (IAHS).
Leonardo Da Vinci is best known as one of the greatest artists of his time;
however, as many of us are aware, he was also a great engineer and scientist,
with fragments of his scientific writings being recovered in the beginning of
the 19th century. Many people have written about Leonardo Da Vinci
and recently, probably as a reaction of the novel by Dan Brown The Da Vinci Code, he has received a lot
of attention from the public and the media. However, little has been written
about his pioneering work on water. Hydrology being a relatively young science,
the hydrological community has not spent much time looking back at how the
ancient philosophers and scientists regarded water, or putting hydrology into an
historical perspective. The authors carefully report Da Vinci’s seminal work
and provide a modern hydrological backdrop.

In this book, Da Vinci is given the credit for being one of
the first hydrologists, if not the first, who used experiment and deduction as
powerful tools for the development of theory. The authors showed that Da Vinci
formulated hypotheses on the basis of empirical evidence, which he subsequently
tried to test under different conditions. Being an artist, a philosopher, an
engineer and a scientist, he was capable of combining his talents for
observation, for capturing images in drawings, for designing instruments to
test his hypotheses, and for translating these into causal relationships. On top
of that, he tried to translate his theories into quantitative relationships,
difficult though this may have been in his time, given the limited means
available for hydrological observation. He was probably the first hydrological
experimentalist to design and build his own instruments to test his hypotheses.
Imagine what he would accomplish, if he was around today, in our hi-tech
century. The authors of this new book on Da Vinci’s work on water showed that
although his writings were never formally published, his work, like that of the
classical Greek philosophers before him, should be considered a benchmark in
the science of hydrology. With this book they hope this knowledge will be
brought to the community of hydrological scientists and to all who have an
interest in this great artist, scientist and engineer.

The book is divided into 7 chapters comprising: (1) hydrology
before and after Leonardo; (2) Leonardo's treatise on water; (3) the atmosphere
and its structure, constituents and processes, meteorological phenomena, and
measuring devises; (4) the physical structure of the earth, which describes the
earth as a support for the water cycle, a living body, Leonardo's concept of
erosion and the forces shaping the earth's surface, and erosion as a constant
remodelling force of the earth's surface under the effect of tectonics; (5) the
water cycle (the general framework, Leonardo's key questions related to the
water cycle, and his concept of the water cycle); (6) the study of water in
motion (Leonardo's motivation for studying moving waters, and training rivers
or how to raise the economic value of rivers); and (7) Leonardo's legacy.