The curious research of Mark Button 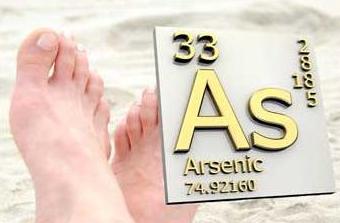 I thought the hand picked readers might want a little distraction from
A/H1N1 virus flu (the flu previously known as swine flu), so I thought how
about a blog on toenails for a change? Well, it’s about a research paper I came
across recently, which used toenail clippings to detect human exposure to arsenic (As). Read on if you want to find out more about Mark Button’s research.

Mark Button and his
colleagues, from the British Geological Survey in Nottingham,UK,
conducted a pilot study to determine the
applicability of toenails as a biomarker of exposure to elevated environmental
arsenic levels. A total of 17 individuals were recruited for the pilot
study: 8 residents living near to a former As mine, Devon, UK, forming the
exposed group, plus 9 residents from Nottinghamshire, UK, with no anticipated
As exposure who were used for comparison as a control group.

All toenail samples
were thoroughly washed prior to analysis and the wash solutions retained for As
determination by ICP-MS to
provide an indication of the background environmental As concentrations for
each group. Total As was determined in washed toenail samples by ICP-MS
following microwave assisted acid digestion. The toenails from people living
next to the mine showed significantly higher arsenic levels (858 to 25

Arsenic occurs naturally in
the environment and people can be exposed to it in several ways,
for example through contaminated water, food or soil. Chronic exposure is
associated with increases in lung, liver, bladder and kidney
cancers. Once ingested, arsenic is absorbed into the bloodstream and then
accumulates in several body parts. Evidence disappears from blood and
urine after a few days but arsenic accumulates long term in keratin rich
materials such as hair and nails. This makes them useful
as biomarkers of chronic arsenic exposure. Toenail samples in particular
are an attractive possibility as they are easy to collect, store and
transport and are less liable to contamination than hair samples.

This research', says
Button, 'highlights the suitability of toenails as a biomarker of exposure to
potentially harmful elements in areas such as the south-west of the UK where more
extensive biomonitoring studies are long overdue.'