What would catastrophic climate change involve? 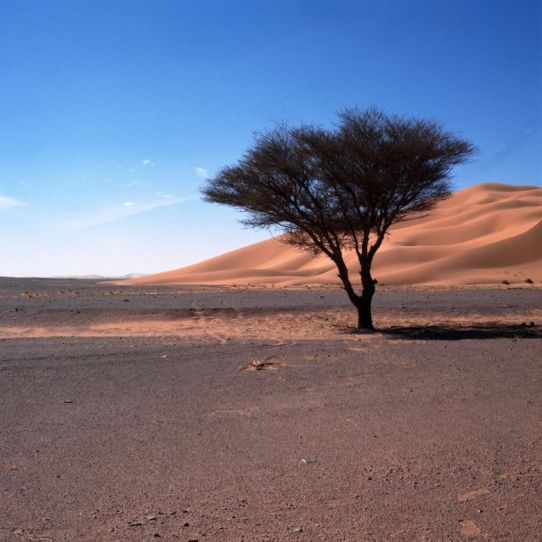 We are quite used to hearing warnings of  'catastrophic climate change'
if we don't reduce emissions of greenhouse gases, but how many of us have a
clear idea of what this might mean? An article
published in New Scientist a few weeks ago looked at this issue, and it
made me feel quite nostalgic for the things we used to worry about — at least
with a nuclear war you have a chance of missing the worst by getting killed
quickly at the beginning, and running out of fossil fuels would be a welcome
solution to the problem of climate change.

The article considered the effects of a 4ºC rise in global average
temperature by 2099, which is not unrealistic — see below. Its conclusions are illustrated by a map on which most of the tropics and a broad
band on either side are shown either in light brown ('uninhabitable desert') or
dark brown ('uninhabitable due to floods, droughts or extreme weather') — the
Sahara Desert is shown as extending north to central Europe. The areas at
risk from rising sea levels look quite small by comparison, but would not be
insignificant. (Unfortunately the map in the online version of the article is not so graphic —
it's a plain map that you have to click on to get verbal descriptions). The countries that would suffer the most are, on the
whole, those that have contributed least to the problem and received fewest of
the benefits of industrialisation (although some are catching up fast in both
respects); but even if we in the rich temperate countries didn't care about
them, we would face significant problems too.

On the bright side, the article estimates that, as land in northern and
southern latitudes would become suitable for agriculture as the climate warmed
(but how good would the soil be, I wonder),
it would be possible to feed the predicted world population of around 9 billion
people. However, this would require population movements on an enormous scale, and I
rather doubt if the necessary international political agreement could be reached
— famine and war seem more likely than an orderly transfer of Africans and
Indians to Siberia and Canada. A letter in last week's New Scientist
points out that it might be easier to try and adapt by means of water storage
and irrigation; but we cannot be sure that this would work on the scale
required, and in such a situation the world economy would probably be in no
shape to pay for large-scale engineering, or for food shipments to the affected
countries.

Significant loss of biodiversity would be inevitable as natural habitats
disappeared — starving people may not worry about this in the short term, but
it would be a great pity from our
current perspective, would reduce the
resilience of ecosystems to cope with further environmental stresses, and would
make it harder to develop and breed new crops..

Even if we did cope with a 4ºC rise, there is no guarantee that it would
stop there.

Of course in the absence of major increases in life expectancy (unlikely if
the world is not stable and prosperous), neither I nor the great majority of
readers of this blog will be around in 2099, but it's unlikely that everything
will carry on as normal until a sudden disaster in that year — in my lifetime
we could easily be halfway to the scenario described above (I wonder if we
should take up unhealthy diets or dangerous hobbies to reduce our chances of
being here when things get serious!). And anyone who has
young children or grandchildren, or might in future, needs to be worried for
them.

The question that probably occurs to you is 'how likely is this to happen?' A 4ºC
temperature rise is certainly possible — it is in the middle of the range predicted by the
Intergovernmental Panel on Climate Change in its 2007 report if fossil-fuel-intensive economic growth continues (and
possible even if it does not). As my colleague Halina heard at the recent
climate congress in Copenhagen (see her blog
entry on the conclusions of the conference), we are currently on course for
this worst-case scenario, as greenhouse gas emissions continue to rise (not to
mention the problem of methane
from melting permafrost, poorly understood and so not emphasised in the IPCC
report, but with the potential to make things much worse). My impression as a
non-expert is that the consequences of such a temperature rise are harder to
predict (the summary of the IPCC report is not as specific as the article), but
that the scenario described in the article is sufficiently based on the work of
climate scientists to be a serious possibility. Even if you assume that it errs
on the side of pessimism, any rise greater than 2ºC, a figure likely to be
reached under all the scenarios considered by the IPCC, would still cause
serious problems according to Halina's blog entry from the conference.

Another article
in the same issue of New Scientist discusses the idea of geoengineering
— if we don't reduce greenhouse emissions quickly enough, we might be able to
prevent climate disaster at comparatively small expense by, for example, placing
giant mirrors into orbit to reflect the sun's rays, spraying sulphate particles
(normally considered a pollutant) into the stratosphere to achieve the same end,
or fertilising the oceans to stimulate CO2-absorbing plankton.
However, most of these technologies are unproven, and most would probably have
unpredictable adverse effects, leading to political problems between countries
that implemented them and those that suffered from them.

Some might argue that climate models make things look worse than they will
actually
be, that technological development will enable us to engineer our way out of
trouble, that economic growth will enable us to spend our way out, that it's too
late and we're
all doomed whatever we do, or that some other disaster (how about bird flu?)
will get us first. However, I think most people would agree that given the
potentially devastating consequences of inaction, and the authoritative
predictions that the later we act the worse the problem will be, hoping for the
best is a high-risk strategy and over-pessimism will be self-fulfilling — it is
important to act soon. Almost any amount of investment now would be worth making
to avoid the consequences discussed above, and Lord
Stern of Stern Report fame estimates that investment of as little as 2% of
global GDP would be sufficient. He points out that in the unlikely event of the
world's climate scientists being wrong, this would be a comparatively small amount of money to
waste and would have other beneficial effects anyway. Let's hope that the
politicians at next December's UN Climate Change
Conference can agree on measures that ensure our future, and that they and we
can successfully implement them.

Halina's daily blog entries from the recent conference can be found by following
these links: day
1,
day
2,
day
3, and conclusions
and outcome.

The conference website, with webcasts of the plenary sessions, and abstracts
of all presentations, is here. All
findings are to be compiled in a book on climate change due
to be published in 2010 (an extensive summary will be available in
June this year).

The latest IPCC report is here.

New Scientist has a list of articles on climate change here.

CABI has produced an internet resource (Environmental
Impact) which concentrates on climate change and human impact on the global
environment.

The website of the recent Sustainable Development UK conference, at which
Professor Sir John Beddington, the UK government's Chief Scientific Adviser,
warned of a 'perfect storm' of shortages of food, water and energy by 2030, is here.

In a changing world with a growing population to be fed, the work of
organizations like CABI is likely to be in demand; CABI is organising a conference
next autumn on food security in relation to issues such as climate change.