Is it worth recycling when stuff gets shipped to China and back in the process? Some more eco-questions – part 6 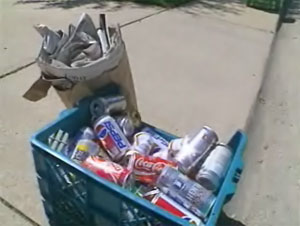 I thought it’s about time I posted other three eco-questions
here, after another long pause. I had to catch up with journals production for
the database, which involves a lot of work, among other work we do here at
Cabi.

Read on to find out also how you should charge your laptop’s
battery, and whether it is worth recycling your aluminium cans?…

What is the best way
to charge my laptop – little and often or let the battery run down completely?

In energy terms, the same amount of energy is used either
way. However, charging a battery little and often reduces its capacity to hold
charge, which means it will need to be charged more often and, therefore, use
more energy on the long run; it will also eventually lose its capacity to
charge altogether. If you kill your battery you will need a new one, and
batteries take a lot of ene

rgy and materials to produce. So charge your laptop battery
or any rechargeable battery to that matter, fully and let it run down
completely to get the longest possible life out of it.

Is it worth recycling
when stuff gets shipped to
China and back in the process? Given the carbon footprint of all that, maybe we
should just let the stuff rot.

With recycling rates going through the roof, some countries
don’t have the capacity to process all their waste. In the past 10 years, for
example, waste paper exports from the UK have risen from 470 000 to 4.7 million
tonnes per year, while exports of used plastic bottles have gone from under 40
000 to 500 000 tonnes. China
has a large demand for both materials, and its trade imbalance with Europe and
the US means container ships
would be heading home empty if they didn’t carry waste back to China.
According to a recent study by WRAP, shipping waste to China in this way uses 10% of the
carbon saved by recycling.

Does it really take
more energy to recycle an aluminium can than to make a new one?

NO, absolutely not. According to Alcoa,
the world’s third-largest aluminium producer, manufacturing a can from recycled
aluminium uses only 5% of the energy of making one from scratch; an energy
saving that could power a 100-watt bulb for 4 hours. In
fact, aluminium has been recycled since they invented the smelting process in
1888. That's because aluminium is so valuable and so easy to recycle.

The CAB Abstracts database
has over 11 000 records on recycling.