From old to new: the story of National Parks 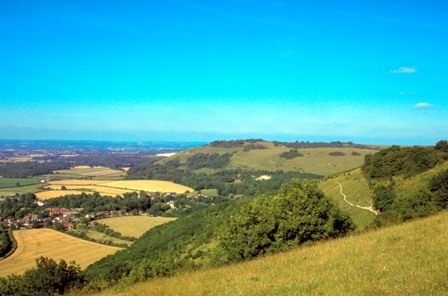 My favourite television viewing over the last few weeks has been a three-part series on the environment and wildlife of Yellowstone National Park. Established in 1872 by a bill signed by the then U.S. President Grant, the Yellowstone region became the world's first National Park and set a major conservation precedent. Thousands more parks and protected areas have since been set up all over the world, becoming a focus for both conservation and tourism. The latest one here in England was announced just this week, with the news that the South Downs in southern England will become the ninth national park in England. But what exactly will designation mean?

There are great variations in how national parks and other protected areas function around the world. In Africa, entry to many parks such as South Africa's Kruger, and Tanzania's Serengeti, is controlled and requires payment of a daily fee. Some parks are fenced, visitor numbers can be controlled, and there are a variety of regulations governing where you can stay and how you travel once in the park. In the UK, no entry permits are required and the parks are still mostly in private hands, with often tens of thousands of residents, and national park designation having an impact mainly in the form of stricter planning regulations.

While the details vary hugely with country and type of park, broadly speaking most national parks have two things in common: they carry a higher degree of protection for nature and the environment than areas outside the parks, and they act as a draw for tourism. While giving an area national park status does not immediately change the attractiveness of the landscape, it may still attract more visitors purely due to the fact that perception changes, with people realising that the area must be worth visiting or it would not have been granted national park status.

Even so, not everyone sees national park status as a good thing. In developing countries national parks can be deeply controversial, because they can lead to local people being evicted from their traditional homes, or prevented from using the parks resources, to create an area seen to be largely for the benefit of wealthy foreign tourists. Increasingly, parks in such countries therefore channel a proportion of their income into schemes set up to benefit surrounding communities. In countries such as Britain where people continue to live in national parks, some residents resent the increased visitor numbers, and the planning restrictions imposed. Thus the announcement of the forthcoming South Downs park has not been universally welcomed.

The decision has been branded "profoundly undemocratic" by Eastbourne Conservative MP Nigel Waterson who said it could affect plans to improve the A27, an important local road. "Of course a National Park can bring some benefits, including tourism" he says. "But ministers have ignored the views of almost all local authorities in the area, as well as local people….there is a real worry that local planning applications will be taken out of local control and decided by an unelected quango."

But supporters say that the designation will boost the regional economy. "National park status can be a real boost for the local economy, attracting new visitors, businesses and investment, but above all, the South Downs' wonderful countryside will be protected forever for the enjoyment of everyone" says Environment Minister Hilary Benn. And Tourism South East, the strategic tourism body for South East England, considers the announcement to be ‘really good news’ for the area, particularly in times of economic recession.

Says TSE’s newly-appointed Chairman, John Williams, of the decision; ‘This comes at a challenging time for tourism which offers the south east new opportunities.  With the economy as it is there’s no better time to take breaks, holidays and day visits in this country.  The new National Park will help raise awareness of the area’s natural beauty and the breadth of what the south east has to offer.’

Even in Yellowstone, the first national park which now attracts over 3 million visitors a year, management of the park can be controversial. As editor of CABI's internet resource Leisuretourism.com, I have reported over the years on ongoing controversy over snowmobile use in the park. Bans and restrictions on snowmobile use have been imposed and then withdrawn in a series of court decisions, the most recent being on November 7, 2008. In the latest ruling, the U.S. District Court in Wyoming ordered the National Park Service to reinstate a 2004 rule allowing snowmobile and snowcoach access in Yellowstone and Grand Teton this winter. While some would like to see snowmobiling banned, the economic stakes are high. According to a 1999 report on the Economic Importance of the Winter Season to Park County, Wyoming, 30% of local businesses said that nearly 80% of their total winter revenues came from winter visitors to Yellowstone National Park. The Wyoming Department of State Parks and Cultural Resources has claimed in the past that a ban on snowmobiles could cost Wyoming as many as 938 jobs.

Protected areas will inevitably have impacts on inhabitants of the parks and surrounding areas, which can be both positive and negative. While for many of us, conservation of unique wildlife, landscape and ecosystems can be intrinsically worthwhile, for others it can be only be justified if there is an economic benefit to the park and its surrounding region. Many reports on economic impact have been produced: see for example reports for Wales, the Yorkshire and Humber region of England, and California, or look up the references below found on the CAB Abstracts database: on the database subset on Leisuretourism.com, there are over 130 bibliographic records of academic studies on the economic or socioeconomic impact of national parks. Further information on tourism and protected areas can also be obtained in the CABI book ' Tourism and Protected Areas: Benefits Beyond Boundaries.'

And if the television series 'Yellowstone' is shown wherever you live, take the opportunity to see it: you won't be disappointed!