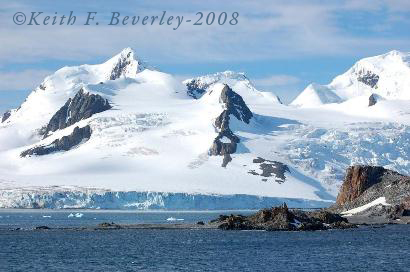 It’s old news that there’s a mountain range under the Antarctic ice, but what’s new is that scientists have now mapped it. Named after a Soviet geophysicist, the Gamburtsev Subglacial Mountains were discovered in 1957, but the size and shape of them remained unknown until now. In The Guardian last week, it was reported that in average temperatures of a harsh -300C, a seven-nation research team worked for weeks around the highest point on the Antarctic ice sheet to map the mountain range, which exists under 2.5 miles of ice and is as big as the European Alps.

The Antarctica Gamburtsev Province (AGAP) project used twin-engine light aircraft to establish a network of seismic instruments to assist in their quest. Some peaks of the subglacial range were discovered to be an incredible 3000 m.a.s.l., which has raised questions about the formation of the ice sheets on the continent. The range itself is at least 800 km long and up to 400 km wide, covering an area of more than 200,000 square kilometres. Valleys sink to 1000 m.b.s.l., compared with valleys in the European Alps of just half this depth1.

These huge peaks have stumped scientists, because high mountains are usually the result of collisions between tectonic plates and it is a surprise to see them in the centre of an ancient continent, it was reported.

In a press release issued by the National Science Foundation, Dr Fausto Ferraccioli explains further. Ferraccioli, a geophysicist for the British Antarctic Survey who led the UK team within the international mapping project, acknowledged the challenge of delving into the data to throw light on how the ice sheets of the Antarctic formed. It is thought that the largest mass of ice in the world, the East Antarctic Ice Sheet, which measures a colossal 10 million square kilometres, formed around the Gamburtsev Mountains. What isn’t clear is that if the ice sheet formed slowly, then a plateau would have been expected under the sheet, following the erosion of the mountain peaks by moving ice and water.

In the New Scientist, Ferraccioli was reported as saying, “One of the first tasks in sifting through the data will be to see if there is any evidence of major differences in the geology of the mountains. Such differences could be a sign that there is an inactive fault line beneath the ice that could have formed the range”.

The Guardian reported that future research will include studying the different ice layers to find the oldest ice. Information will be provided on climate changes of the past and give an indication of how the Earth will respond to increased levels of atmospheric CO2.

Check out CAB Abstracts for more than 14,000 records on climate change.

1. Jha, A. 2009. Mountain range as large as Alps found under Antarctic ice. http://www.guardian.co.uk/environment/2009/feb/24/antarctica-mountains.