Who can predict the fate of the Amazon rainforest? 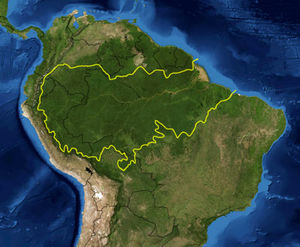 Modellers around the world are trying to predict the fate of the Amazon rainforest under future conditions of climate change. It seems a tiny change in model parameters leads to regular new headlines contradicting previous predictions. The latest of these headlines is that the Amazon forest will survive warming, becoming seasonal forests rather than savannahs, as long as we manage the forest better, i.e. reduce deforestation and fires.

According to a new study by British scientists the “dieback” theory resulting from previous projections had underestimated rainfall, leading to predictions that the southern and eastern Amazon would transition towards savannah with warming.

A 2007 report by the U.N. Climate Panel said: "By mid-century, increases in temperature and associated decreases in soil water are projected to lead to gradual replacement of tropical forest by savannah in eastern Amazonia."

This and earlier research led governments to question the value of forests as carbon sinks if they are going to disappear anyway because of climate change. Should we be trying to prevent deforestation if the forests are going to dieback in future? New models suggests we should as they may not dieback afterall.

The new study published in U.S. Proceedings of the National Academy of Sciences says that almost all of 19 global climate models underestimated rainfall in the world's biggest tropical forest after the scientists compared the models with observations of 20th century climate. This underestimation occurs because climate models are unable to capture some of the peculiar features of the geography of South America. After correcting this underestimation they found that most models suggested that Eastern Amazonia was likely to shift towards a more seasonally dry ‘monsoonal’ climate rather than a dry ‘savannah’ climate, suggesting that Amazonia would remain wet enough over the year to sustain a forest.

They also examined how the Amazon might react to drying and concluded that seasonal forests would be more resilient to the occasional drought but more vulnerable to fires than the current rainforest.

Lead author Professor Yadvinder Malhi, from the Environmental Change Institute at Oxford, said: “Forest protection within Eastern Amazonia could play a major role in minimising the prospects of major dieback, while also contributing to tackling global climate change. Forest cover will help Eastern Amazonia adapt to climate change by helping maintain local rainfall in the dry season, limiting the spread of fires and stopping surface temperatures rising too high. This will help people living in the local towns as well as the forests themselves.”

Malhi points out that the fundamental way to minimise the risk of Amazon dieback is to control global greenhouse gas emissions, particularly from fossil fuel combustion in the developed world and Asia, but that governments led by Brazil also needed to manage the forests better.

"These seasonal forests may be resilient to seasonal drought but are likely to face intensified water stress caused by higher temperatures and to be vulnerable to fires, which are at present naturally rare in much of Amazonia. The spread of fire ignition associated with advancing deforestation, logging, and fragmentation may act as nucleation points that trigger the transition of these seasonal forests into fire-dominated, low biomass forests.

“Conversely, deliberate limitation of deforestation and fire may be an effective intervention to maintain Amazonian forest resilience in the face of imposed 21st-century climate change. Such intervention may be enough to navigate Eastern Amazonia away from a possible 'tipping point,' beyond which extensive rainforest would become unsustainable."