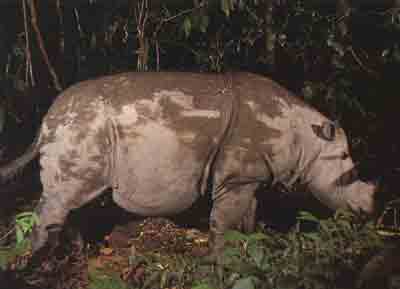 I was slightly taken aback when first reading the 'Irreplaceable' blog from Handpicked author Katherine which started 2009 here on Handpicked. Naturally, I agree with the importance of conserving species such as bees on which so much human food depends – but was she really suggesting that we should give up on the Sumatran rhino? (I also thought she was a bit harsh on bats – they are a vital part of tropical forest ecosystems as pollinators, can eat half their bodyweight in mosquitoes every night, and pollinate some major tropical fruit crops such as avocados, figs, mangoes and peaches).

But of course, Katherine made a very valid point about prioritising finite resources for conservation. Reading through a feature on endangered species in the USA in the January 2009 issue of National Geographic magazine, I found myself mentally making my own list of what I would and wouldn't conserve if I had finite funds to spend. Would I be particularly upset if the Delhi Sands Flower-loving Fly (found in California, less than 1000 left) disappeared? To be brutally honest, no, although I'm sure it has its fans. Nor, I confess, am I too concerned about the 165 Salt Creek tiger beetles hanging on to life in salt marsh in Nebraska (though looking at this website, other people clearly are). But when it comes to loggerhead turtles, or the 300 remaining Mount Graham red squirrels, I'd be much more sympathetic – cuteness does have its advantages for endangered animals. (Here I have to disagree a little though with Katherine's view that 'bats certainly wouldn't win the 'cute and cuddly' vote from many members of the public' – bat walks are very popular with nature lovers, and seeing several million bats exiting from a cave in Borneo at dusk was right up there for me as a wildlife experience with the orangutan sanctuary visited later on the trip).

Which brings us to another reason why some species may be more 'worth' conserving than others. The question was asked in Katherine's article as to whether 'cute and cuddly' is a good enough reason to move something up the conservation priority list, and whether size matters. Even taking a brutally pragmatic approach to setting priorities, the answer to both these questions can in some cases be 'yes'. Because even if cute or charismatic species have no value for food production as bees do, by attracting conservation funds they can lead to the protection of important habitat where other organisms may also need conserving, and they often also have their own economic value for tourism.

Tourism has led to devastating environmental damage in many parts of the world, particularly along the coasts, but there can also be a synergy between wildlife, tourism and conservation. Key charismatic animal species can provide income to protect habitats and support local communities. One example widely studied is that of whale sharks. Dearden et al. (2007) suggest that the economic value of shark watching has provided an incentive to protect sharks and/or their habitats in several countries, including the Maldives, the Philippines, and the USA. Looking at whale sharks, it is claimed that a live whale shark in Belize is worth at least US$34,906 a year or approximately US$2 million over its lifetime, assuming a minimum life expectancy of 60 years. Whale shark watching at Ningaloo Reef, Western Australia, has the greatest estimated economic returns of all the sites studied, approximately US$10 million. Overall, the chapter suggests that the development of shark watching is a good thing for both sharks and people.

Another species that more than pays for itself is the mountain gorilla. This is an uncomfortable example in some ways. When the death of a family of mountain gorillas in the Congo seemed at times to be attracting more media attention than the death and misery caused to thousands of people by the conflict there, it does raise questions about the priorities of us in the West. But gorillas bring in millions of dollars in tourism income to Rwanda and Uganda (see eg Adams and Infield, 2003), and in changed circumstances may hopefully one day do the same in the Congo.

One species that would struggle to attract my vote for conservation funds, despite qualifying as cute and cuddly, as well as large and charismatic, is the Giant panda, simply because of its limited diet, slow breeding and general evolutionary inefficiency. But again it has economic value: Cheng Li, a researcher at Sichuan University, told a symposium on climate change and pandas' habitat in Chengdu in 2008 that his calculation suggests that giant pandas contribute 33.2 percent of the tourism revenue for Sichuan and created about 29 percent of jobs for the tourism industry.

Which brings us back to that rhino, and the question as to whether it is worth spending considerable conservation effort and money on an animal that may come to depend on expensive captive breeding programmes. Another rhino that was once nearly extinct, the African southern white rhinoceros, is featured by National Geographic as a dramatic conservation success story. Down to a remnant population of around 40 rhinos in 1895 after indiscriminate hunting, a game reserve was set aside for them. By the 1960s private landowners had also begun building white rhino herds for tropy hunting. The population is now up to 17,500, and the hunting fee is now about $40,000. Making rhino ranching profitable, says Michael Knight, head planner for national parks in South Africa, was the key to saving the animal.

Another animal once wholly dependent on captive breeding, the Przewalski Horse, once looked as if it could be lost forever from the wild. But the Foundation for the Preservtion and Protection of the Przewalski Horse, founded by a Dutch couple in 1977, built up the genetic diversity through captive breeding and has now started controlled release into the wild in Mongolia. Ecovolunteers, part of a growing trend for 'voluntourism', now pay to help track them across the steppe.

Saving species is not always easy. In the USA alone, 1050 species are listed as endangered: since 1973, only 39 species have been removed from the list, of which 9 became extinct, 16 were found not to be imperiled, and 14 recovered enough to be delisted. But there are a few examples such as the African southern white rhinoceros and the Przewalski Horse which show how even species found only in captivity, or down to the last few survivors, can not only recover but pay for themselves in doing so. Which is heartening – for after all, each of these endangered species is indeed 'irreplaceable'.