The mighty PRION! may be no more!

These distorted pathogens lack both DNA and RNA and are
believed to cause fatal brain diseases, such as chronic wasting disease (CWD)
in deer and moose, mad cow disease in cattle, scrapie in sheep and
Creutzfeldt-Jakob disease in humans. Prions resist almost every method of
disinfection from chemical disinfectant and autoclaving to fire, which all
reduce infection but do not fully eliminate the pathogen. Prions are almost
indestructible up to now, or so it seemed.

A research team from the Dept. of Soil Science, University
of Wisconsin-Madison, led by Joel Pedersen, have found a common soil mineral, birnessite
(Na0.3Ca0.1K0.1Mn4+Mn3+O4·1.5(H2O)), a mineral oxide of manganese with calcium, potassium and sodium, which can
penetrate the prion’s shield and degrade the protein (PrPTSE). 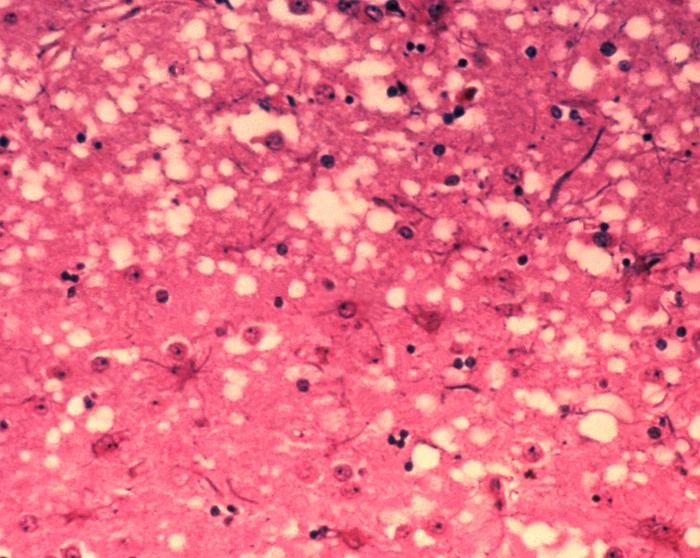 Microscopic "holes" are characteristic
in prion-affected tissue sections, causing the tissue to develop a
"spongy" architecture. (Picture from Wikipedia)

Prions remain inactive in the soil for many years, which might be due to reactive soil components. Members of the birnessite family of manganese oxides (MnO2) rank among the strongest natural oxidants in soils. The possible abiotic degradation of the protein by birnessite was investigated by Pedersen's team, using a synthetic analogue of naturally occuring birnessite minerals. Aqueous MnO2
suspensions degraded the PrPTSE as shown by decreased
immuno-reactivity and reduced ability to seed protein misfolding
cyclic amplification reactions. Birnessite-mediated PrPTSE
degradation increased as the solution's pH decreased, which is consistent with
the pH-dependence of the redox potential of MnO2. Exposure to
5.6 mg MnO2 ml–1 (PrPTSE : MnO2=1
: 110) decreased PrPTSE levels by

4 orders of magnitude.
Manganese oxides may contribute to prion degradation in soil
environments rich in these minerals.

The research was published
in the Journal of General Virology in
January 2009 and may be a big step towards finding a method to decontaminate
soil and other environment infected with prions.

If you're researching prions check out the CAB Abstracts database; you'll find over 4000 records on prions there.