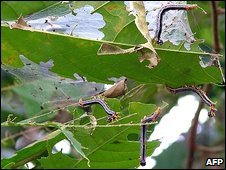 Last week Liberia's President declared a state of emergency and appealed for international aid to fight a plague of caterpillars that is spreading across Liberia, destroying whole farms within days and contaminating water sources with their faeces. Find out more about the pest, its impact on Liberia and how CABI is helping African farmers forecast pest attacks in time to spray their crops…

Liberia is in the middle of it's worst infestation of crop-destroying caterpillars since the 1970s. Both Liberia and neighbouring Guinea, which has also been affected, have been carrying out aerial spraying against the insects and Sierra Leone, which is also at risk, has mobilised chemicals and personnel to its border with Liberia..

At first the insects were thought to be armyworms (Spodoptera exempta), but it soon became clear that this wasn’t the case due to differences in crops that were targeted, the positioning of cocoons and an unusual looping behaviour. After a field investigation last week the UN’s Food and Agriculture Organization (FAO) were unable to identify the species and sent it to CABI and the International Institute of Tropical Agriculture (IITA) in Nigeria who confirmed that the species is Achaea catocaloides, a pest endemic to West Africa.

"Correct taxonomic identification of this insect is crucial for managing this worrying problem," said Eric Boa, Head of the Global Plant Clinic (GPC) at CABI. "The wrong control programme can waste millions of dollars and cause new problems. Now efforts can be focused in the right direction." 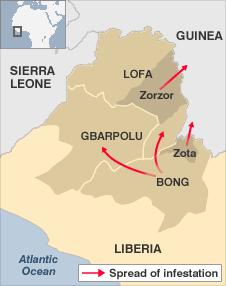 The invasion began in Bong County before spreading into neighbouring Lofa and Gbarpolu counties. To make matters worse, the worms are now spreading to neighbouring Guinea and towards Sierra Leone.

"The farmers in Liberia know these caterpillars but they have never seen them on this scale. It is extraordinary what has been seen here," said Dr Winfred Hammond, an FAO entomologist, based in Accra, Ghana. More than 20,000 people have so far had to evacuate their homes. As well as devouring coffee, cocoa and plantain crops, the invaders also cause disease, as their faeces enter rivers and streams, which some villages rely on for drinking water.

One piece of good news for farmers is that the caterpillars are likely to be easier to control than armyworms because they spin their cocoons on the ground under fallen leaves rather than underground. Trampling or fire may be a control option, however, with such extensive outbreaks spraying with pesticides is likely to have the most success. These are too expensive for most farmers, so the government is stepping in and calling for international assistance, to begin aerial crop spraying. It will be particularly challenging to reach the sites of the caterpillar eggs which are laid on the leaves of very tall Dahoma trees.

"If they are feeding in tall trees, this can be extremely difficult without aircraft sprayers" said Dr Wilson, an expert on armyworms.

The cause of this year's unexpectedly large outbreak is likely to be unusual weather patterns, including a particularly long rainy season last year, according to Dr Kenneth Wilson, an ecologist from Lancaster University.

The next stage is to step up a program of pesticide spraying which until now has failed to reach any more than a dozen of more than 100 affected villages, according to Dr Hammond.

"We cannot avoid applying pesticides. Now that we have an accurate identification, we can choose a pesticide which is specific to this species of caterpillar.

"But in the long term, we have to take this as an opportunity to develop early warning strategies for countries in West Africa. Not only for these caterpillars, but for other migratory pests." 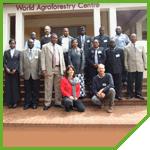 National forecasting systems exist in some African countries to warn farmers about possible outbreaks during the growing season so that they have time to spray crops, if they can afford to. However, these measures don’t always work because the attacks can be very localised and often affect isolated communities that are difficult to contact.

CABI is in the middle of a 3 year project that aims to give farming communities the skills they need to tackle armyworm problems themselves. The project aims to help farmers to improve their own incomes and food security without having to rely on central government. Part of this will involve learning more about the way information about the pest flows between farmers, extension workers and other stakeholders.

Government extension workers will train local farmers to use simple insect traps and rain gauges which will initially be provided through the project. They can then use this low-cost equipment to make weekly predictions on the likelihood of an armyworm attack. If an attack is likely, the information is shared within the community as well as being fed into national networks.

Now, Tanzania is starting to build community-based pest forecasting into its pest control budgets. Local districts have expressed support for scaling up the approach and NGOs are interested in getting on board and applying the techniques in other rural communities. The project therefore aims to spread these success stories from Tanzania into other areas of the armyworms’ territory in eastern and southern Africa.

For more information on CABI’s armyworm project, please contact CABI Africa, africa@cabi.org, or go to the project website. Find out about CABIs involvement in identifying the pest by clicking here.