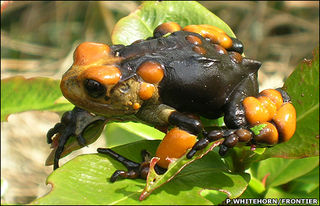 15 new amphibian species have been described for the first time, found in Tanzania during research led by UK conservation charity Frontier. The researchers say that the range of these frogs appears to be restricted to a few remote valleys deep in the mountain forests of eastern Tanzania. The haul includes a number of species from the Nectophrynoides genus (above) whose members have distinctive markings and colourings and are unique because females give birth to offspring rather than laying eggs, and a burrowing toad (right) from the genus Probreviceps whose habitat in Tanzania’s mountain forests is under threat from deforestation.

At the same time, 12 new species of tree frog have been described from the forests of Western Ghats, India. These findings are the result of 10 years of extensive field study in the area throughout its 1600 km range. The study also rediscovered a ‘lost species’: Travancore bushfrog (Philautus travancoricus) was considered extinct since it was last reported more than a 100 years back. In this study the species was rediscovered from a highly degraded environment in its original locality. Forests the Western Ghats continue to be threatened and large areas are being destroyed for plantation and urbanization. Seven of the 12 new species were only found in unprotected areas which were forests in the past.

These discoveries are great news for the amphibian group whose IUCN Red List published in 2004 listed 32.5% of amphibian species as threatened (compared to 11% of birds when assessed in 1994 and 25% of mammals when assessed last year). Dramatic declines in populations, including mass localised extinction, have been noted in the past 20 years from locations all over the world, and amphibian declines are perceived as one of the most critical threats to global biodiversity. The main cause of threat to amphibians in Africa is habitat loss, whereas in other parts of the world main threats include overexploitation for the pet trade or food (Asia) and Chytridiomycosis (America).

Take a look at the pictures of some of the new Tanzanian toads on the BBC News website – In Pictures: Tanzania's toad haul.

S. D. Biju and F. Bossuyt (2009) Systematics and phylogeny of Philautus Gistel, 1848 (Anura, Rhacophoridae) in the Western Ghats of India, with descriptions of 12 new species. Zoological Journal of the Linnean Society 155, 374–444.