Are new forests saving our climate? 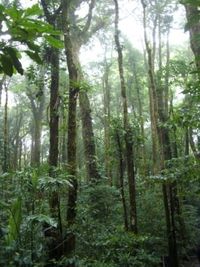 In tropical countries around the world areas of farmland are reverting to nature as people abandon their land and move to the cities in search of better livings. As farmers turn their backs and walk away new life is springing up in the fields they left behind. Seedlings push out of the ground – but not the seedlings that the farmers planted this time – instead, tree seedlings. And they’re growing faster than you might think!

New "secondary forests" are emerging in Latin America, Asia and other tropical regions at such a fast pace that the trend has set off a serious debate about whether saving ancient rainforest may be less urgent than once thought. One estimate suggests that for every acre of rainforest cut down each year, more than 50 acres of new forest are growing in the tropics on land that was once farmed, logged or ravaged by natural disaster.

These new forests could soften the effects of rainforest destruction by absorbing carbon dioxide and, to a lesser extent, providing habitat for endangered species. The United Nations and Smithsonian Institution have bought into this idea but it still remains controversial with many environmentalists.

“Biologists were ignoring these huge population trends and acting as if only original forest has conservation value, and that’s just wrong,” said Joe Wright, a senior scientist at the Smithsonian Tropical Research Institute. If he’s right this could have huge implications for climate change mitigation strategies, including the possibility for the rural poor to continue profitting from the rainforests on their land in future.

But does every forest have the same environmental value?

“Yes, there are forests growing back, but not all forests are equal,” said Bill Laurance, another senior scientist at the Smithsonian. While new forests may absorb carbon emissions, he says, they are unlikely to save most endangered rainforest species, which have no way to reach them.

Around 38 million acres of original rainforest are being cut down every year, but in 2005, according to the most recent FAO “State of the World’s Forests Report”, there were an estimated 2.1 billion acres of potential replacement forest growing in the tropics — an area almost as large as the USA. However, this new forest is difficult to define – it includes both secondary forest on former farmland which has the potential to grow into a vibrant rainforest, and “degraded forest” on land that has been partly logged or destroyed by natural disasters and then left to nature – this might never become more than a tangle of trees and weeds.

Still, the fate of secondary forests lies not just in biology. A global recession could erase jobs in cities, driving residents back to farming.