New evidence of warming in Antarctica 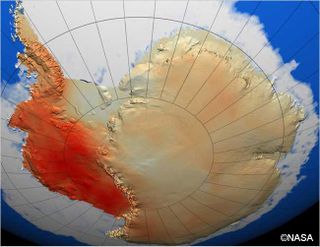 An illustration that depicts the warming that scientists have determined has occurred in West Antarctica during the last 50 years. The dark red shows the area that has warmed the most.

Authors found that for the period 1957-2006, temperatures across Antarctica rose, on average, at rates comparable to the warming that has been measured globally. Temperatures in this area are still well below freezing and the warming will not have an immediate effect on sea level. Warming is more pronounced in West Antarctica (0.17C per decade), but the authors still found slight warming in the East over the 50 year period (0.1C per decade). However, in agreement with earlier studies, they did find that since the late 1970s, temperatures had actually cooled in East Antarctica.

Interestingly, CFC emissions may have contributed to cooling in Antarctica in the past. Since these have now been phased out and the hole in the ozone layer is expected to close, there may be extra cause for concern as the cooling trend may reverse in future years.

To find out about the effects of climate change on terrestrial and
freshwater ecosystems, including a comprehensive list of recent climate
change reports, take a look at our new internet resource, Environmental Impact.