Around 963 million people worldwide are now undernourished,
according to the most recent survey of the crisis by the Food and Agriculture
Organisation (FAO). In an interview to the Independent Newspaper the UN body
expects the situation to worsen with the financial recession. The number is
expected to rise steadily this year and might reach a billion by the end of the
year. The FAO fears the numbers will go on increasing for years to come. This
would be a blow to world leaders’ pledge, in a special summit in 2000, to cut
hunger by half by 2015 (see Isobel's blog). What is the reality? 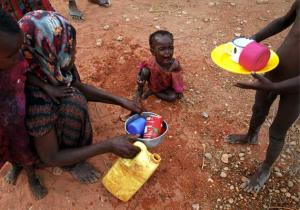 The reality of the situation is shown in a short feature
documentary film produced by Jess Search and directed by Beadie Finzi. It was made over two
years and illustrates the plight of Swaziland, a country whose economy depends
on agriculture and who is facing its 6th year of drought. The film
is called 'The Hunger Season' and encourages us to consider the relationship
between our governments, NGOs and the fate of countries in the developing
world. The film and a list of others on food issues can also be found here.

The reports section of the CABI Environmental Impact database also contains a paper
produced by the FAO which aims to identify potential impacts of anticipated
changes in climate on food safety and their control at all stages of the food
chain. The purpose is to raise awareness of the issue and to facilitate
international cooperation in better understanding the changing food safety
situation and in developing and implementing strategies to address them. FAO
also produced a framework document
on climate change and food security. The document provides background
information on the relationship between climate change and food security and
ways to deal with the new threat of food shortage. It also shows the
opportunities for the agriculture sector to adapt and describes ways it can
contribute to mitigating the climate challenge.